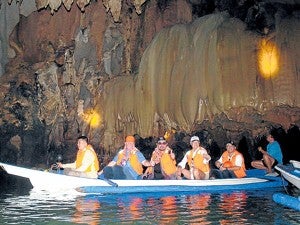 A new mineral, first found in Brazil, has been unearthed at the Puerto Princesa Underground River, giving another reason why this estuary should be included in the world’s wonders of nature, environment officials said Wednesday.

The subterranean river is a “true wonder of nature,” Paje said. He noted that the river and its caves were helping scientists understand Earth’s evolution.

A few weeks ago, Italian scientists found a new mineral at the mouth of the cave, Paje said.

The new mineral, called serrabrancaite, was found by  Paolo Forti, an Italian crystallographer, and the Italian La Venta Geographical Association.

The mineral was first extracted at the inlet of the river in Serra Branca, Brazil. It had never been found in caves before, Paje said.

“Cave experts themselves are amazed because only a few caves in the world host more than three to four minerals, yet in PPUR alone, they have unearthed at least 11 of which, three are new cave minerals,” Paje said.

Serrabrancaite is mostly induced by the mineralization of bat or seabird droppings known as guano, scientists said.

The other two new minerals are robertsite and janggunite, while the eight previously known cave minerals include calcite, gypsum, apatite, variscite, strengite, manganite, rodocrosite and pirolusite.

The PPUR flows directly into the sea, and the lower half portion of the river is brackish and subject to tidal influence.

The river, considered one of the most important underground estuaries in the world, supports one of the major biodiversity areas in the Philippines.

In recognition of its globally significant natural properties, the PPUR was put on the List of Natural World Heritage Sites of the United Nations Educational, Scientific and Cultural Organization.

Online voting is through the website www.new7wonders.com, while SMS voters can just send “PPUR” to 2861. Voting ends on November 11.

Noting that online votes for the PPUR has slowed down, Paje is appealing to Filipinos to encourage their friends and relatives to cast their votes on the website before the contest ends on November 11 at 11:11 a.m.

SMS participation, however, has increased dramatically, he said.

The search for the New Seven Wonders of Nature was organized by the Switzerland-based New7Wonders Foundation in 2007. When the search started, there were 440 entries from more than 220 countries vying to be included in the final seven.

Hagedorn said the inclusion of the PPUR was a boon for local tourism. In the past, only Palawan residents visited the river.

Now, Filipinos from other parts of the country and foreigners trek to Puerto Princesa to see and tour the world’s largest subterranean river.