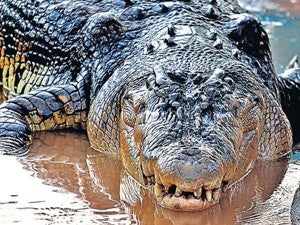 MEAN-LOOKING Lolong is on his way to being formally declared as the world’s biggest captive saltwater crocodile. JEOFFREY MAITEM / INQUIRER MINDANAO

KORONADAL CITY—Move over, Cassius. The Philippines’ saltwater crocodile, Lolong, is the world’s biggest reptile in captivity.

Lolong is bigger than Cassius, an Australian saltwater crocodile (Crocodylus porosus) and the Guinness record holder, based on measurements taken by zoologist Dr. Adam Briton, who was part of a 10-member National Geographic (NatGeo) team doing a documentary on the Philippine crocodile at the wildlife preservation center at Bunawan town in Agusan del Sur province.

In 2008, Briton was commissioned by the Guinness World Records to measure Cassius.

Captured in the Agusan Marsh in September, Lolong’s length was initially measured at 6.12 meters (20 feet 4 inches), according to Apollo Canoy, a Bunawan municipal councilor, who was with Briton’s group. Cassius is only 5.48 meters (17 feet, 11.75 inches) long.

Cassius was caught at the Northern Territory in Australia in 1984 and is housed at Marineland Melanesia’s crocodile park, according to the Australian newspaper Sydney Morning Herald.

Briton was amazed when he saw Lolong, Canoy told the Philippine Daily Inquirer by phone. “He told us that Lolong is the biggest croc ever captured alive.”

Nora Javellana, an aide of Briton, said the crocodile expert refused to be interviewed.

But Canoy quoted Briton as declaring that Lolong’s health condition “is good.” The reptile is housed in a concrete cage with a makeshift pond.

“Briton did not have a hard time taming the giant crocodile because he was not moving much,” the councilor said.

According to Elorde, Briton injected a tranquilizer into Lolong and determined the exact length of the reptile using a measuring stick.

Earlier, Elorde said Briton’s findings could also be used by Guinness to authenticate claims that Lolong is the world’s biggest crocodile.

Lolong is believed to have eaten a man who went missing in July and to have bitten off the head of a 12-year-old girl in 2009. The crocodile was caught on September 3 this year.﻿