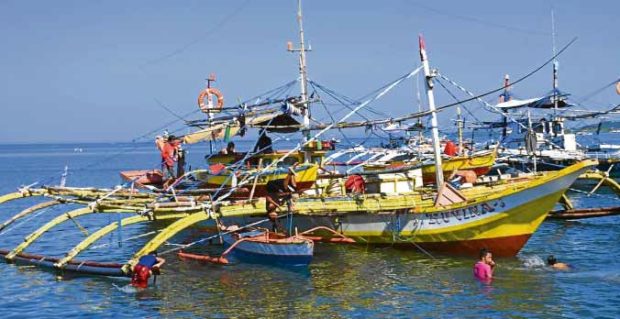 PANATAG FISHING The skipper of the fishing boat Ruvina 1 reported that Chinese coast guards allowed his group free access to Panatag Shoal but lamented that the area could be already overfished. —WILLIE LOMIBAO

INFANTA, Pangasinan — The Chinese Coast Guard appears to have lifted a blockade of Panatag Shoal following the filing of a complaint in the International Criminal Court (ICC) against President Xi Jinping by two former Philippine officials.

Fishermen returning from Panatag, known internationally as Scarborough Shoal, reported fishing in the area unhindered by Chinese coast guards who usually drove them away from their traditional fishing grounds in the West Philippine Sea.

West Philippine Sea is the local name of the waters within the Philippines’ 370-kilometer exclusive economic zone in the South China Sea.

Fishermen from this town had expressed fear of a backlash from the filing of the complaint, but those from Barangay Cato who had sailed to Panatag to “test the waters” returned on Thursday with good news.

Benjamin Sumagunday, skipper of the fishing boat Ruvina 1 that sailed to Panatag on March 23, reported that the Chinese coast guards allowed his group free access to the shoal.

He said the coast guards even allowed them to fish inside the shoal’s lagoon, something they were not allowed to do before.

Sumagunday said he did not notice any unusual movements by the five Chinese Coast Guard ships stationed near the shoal during his group’s stay there.

China seized Panatag from the Philippines after a two-month maritime standoff between the two countries in 2012.

With no military muscle to retake the shoal, the government of then President Benigno Aquino III challenged China’s claim over nearly all of the South China Sea at the UN-backed Permanent Court of Arbitration in The Hague.

The court ruled in favor of the Philippines in 2016, invalidating China’s sweeping claim and declaring it violated the Philippines’ sovereign rights in the West Philippine Sea.

But President Rodrigo Duterte set aside the ruling, preferring warmer ties with China in exchange for aid, loans and investment.

Although China reportedly agreed to allow Filipinos to fish at Panatag, fishermen often reported being shooed away by the Chinese Coast Guard.

Last week, fisherman Usaffe Fontanilla reported that the Chinese Coast Guard seemed to be testing its water cannon when his group was about to leave the shoal on March 19.

But Sumagunday said on Thursday that the Chinese coast guards were driving away Vietnamese, not Filipino, fishermen.

The Vietnamese fishermen would move about 10 km from the shoal then return to resume fishing there, he said.

They would leave before the Chinese coast guards could see them, he said.

Sumagunday, however, had a sad story to tell: Fishing at Panatag was no longer the lucrative business it used to be.

He said his group’s trip to the shoal last month was almost a losing one, with each man on the boat making only P2,000 after selling their catch of small red snapper, parrot and rabbit fish.

That could mean only one thing: Panatag could be overfished.

“Maybe there are now too many fishermen in the area,” Sumagunday said, adding that there were more than 20 fishing boats in the area during his group’s trip there last month.

He said fishermen from the Visayas and Palawan were now going to Panatag, unlike before when only fishermen from Pangasinan and Zambales fished at the shoal.