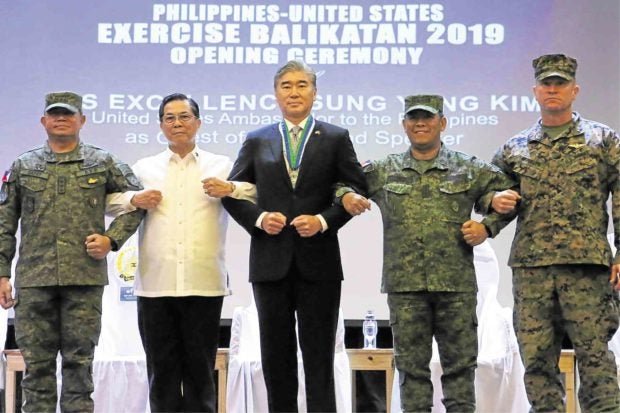 MANILA, Philippines — The Philippines has filed a diplomatic protest with China over the presence of hundreds of Chinese vessels near a Philippine-occupied island in the heavily disputed South China Sea, Malacañang said on Monday.

The Palace, however, could not say when the Department of Foreign Affairs filed the protest or what the document contained.

But presidential spokesperson Salvador Panelo described as “exaggerated” a television news report that 617 Chinese vessels had been seen “circling” around Pag-asa, a Philippine-occupied island in the Spartly archipelago known internationally as Thitu Island.

“If you’re circling, it means you’re planning something. If you’re just stationary, maybe you’re just there to observe,” Panelo said.

He cited a report from the military’s Western Command that said 275 Chinese vessels had been observed around Philippine-occupied islands in the West Philippines Sea, waters within the country’s 370-kilometer exclusive economic zone in the South China Sea.

Panelo criticized the news report for distorting the number of Chinese vessels and for using “alarming statements” that were not in the military’s report.

Actually, the Western Command reported in late March that more than 600 Chinese fishing vessels had been seen surrounding the sandbars near Pag-asa since January.

The highest number of vessels recorded on a single day was 87, on Feb. 10, Marine Lt. Col. Elpidio Factor, assistant chief of the Western Command Unified Command Staff for Intelligence, said at a meeting of the Regional Development Council and the Regional Peace and Order Council on March 28.

“These vessels are considered Chinese maritime militia that are occasionally complemented by the Chinese Coast Guard to sustain China’s assertive presence in the vicinity of the sandbars,” Factor said.

There are three sandbars between Pag-asa and Philippine-claimed but China-controlled Zamora (Subi) Reef, which the Chinese had developed into a military outpost in the Spratly region.

Gen. Benjamin Madrigal Jr., chief of staff of the Armed Forces of the Philippines, on Monday clarified that only some 200 vessels from different countries, including China, frequented the vicinity of Pag-asa.

Madrigal said the Western Command’s figure represented the total sightings since January and the vessels were the same.

The sightings include ships that linger in the area and vessels that just pass through, he said.

Madrigal said the matter was of primary concern to the Philippine Coast Guard and other maritime agencies.

Kalayaan Mayor Roberto del Mundo in early March expressed concern about the presence of the Chinese vessels, which he said blocked the route of Filipino fishermen in the sea.

The Washington-based Asia Maritime Transparency Initiative has reported that the Chinese fishing vessels do not really fish in the area, but are there to intimidate ships that come close to the artificial islands that China has built in the South China Sea.

Chinese Ambassador to the Philippines Zhao Jianhua visited Malacañang on Monday for a meeting with Panelo.

Zhao told reporters before the meeting that China was cooperating with the Philippines in verifying reports about Chinese vessels stationed near Pag-asa.

“We are cooperating with the Philippine side to verify whether there’s any truth in that kind of report,” Zhao said.

He, however, said the vessels in the area were fishing boats and that the fishermen were unarmed.

“They are actually fishermen. If they are fishing there, they must be fishermen,” he said. —With reports from Jeannette I Andrade and Frances Mangosing