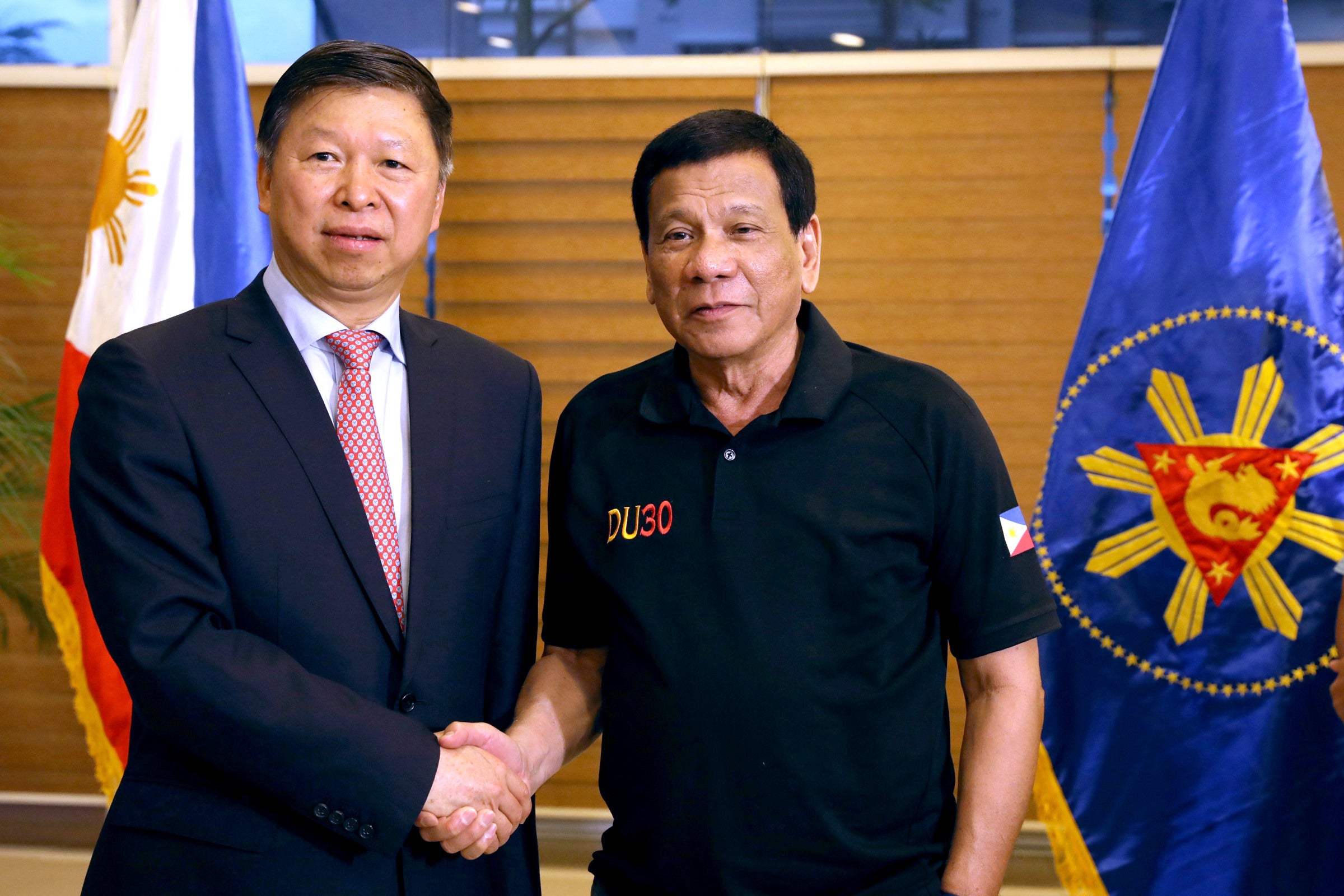 President Rodrigo Roa Duterte poses for posterity with Song Tao, head of the International Department of the Communist Party of China Central Committee, who paid a courtesy call on the President at Matina Enclaves in Davao City on March 27, 2019. KARL NORMAN ALONZO/PRESIDENTIAL PHOTO

In a meeting with Song Tao, Minister of the International Department of the Communist Party of China (IDCPC) Central Committee of China, Duterte noted that his administration “had no participation” in the ICC case.

Chinese Ambassador to the Philippines Zhao Jianhua and Chinese Consul General to Davao Li Lin accompanied Song during the meeting.

“I would like to welcome you warmly, and I’d like to tell you that we are very happy with your visit,” Duterte was quoted to have told Song.

A Malacañang statement said Duterte and Song “discussed issues that would further strengthen the relationship between the two countries.”

It added the two officials “have also discussed matters of mutual interest, especially on the subject of the South China Sea/West Philippine Sea.”

But Duterte, according to the statement, nevertheless told Song that “the Philippines is a democratic country” and that “we cannot stop people from just filing cases.”

The President, it further said, “also expressed his gratitude to the Chinese government for the vibrant trade relationship between the Philippines and China.”

The Chief Executive likewise “underscored the relentless support of the Chinese government to the Build Build Build Program of the Duterte administration to beef up the nation’s infrastructure development,” the Malacañang statement added.

“If there will be a need of assistance in improving the people’s lives, China is willing to help,” Song was quoted to have told Duterte.

Read Next
Returning Pinoy IS fighters to face charges
EDITORS' PICK
Cebu City closes its borders
IATF: Food firms to operate with 50% of workforce during Luzon quarantine
Style and music journeys with Claudia Barretto
UP-PGH wards for COVID-19 patients finished in 5 days
DILG to stranded workers: ‘Stay where you are’ until Luzon-wide quarantine is over
BREAKING: 1,075 people in PH has coronavirus disease – DOH
MOST READ
Pacquiao to seek probe on leaked private letter from Barangay Dasmariñas
Another doctor dies due to COVID-19 in Cebu City, doctor-husband critical
BREAKING: 1,075 people in PH has coronavirus disease – DOH
Locsin blasts DOH for blocking entry of Chinese doctors
Don't miss out on the latest news and information.