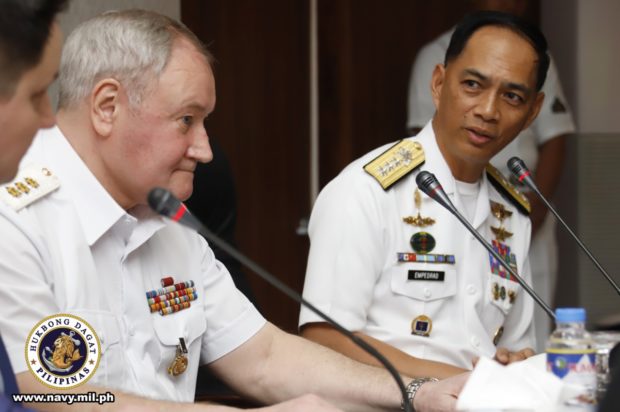 MANILA, Philippines — The navies of the Philippines and Russia are set to take their ties to a new level with a naval cooperation agreement to be signed in July.

“This will strengthen the cooperation of the Philippine Navy and Russian Navy,” Flag-Officer-in-Command Vice Admiral Robert Empedrad told reporters on Thursday.

Discussions for the agreement started last year during Empedrad’s visit to Russia and is set to be signed during his next visit in July.

“We have already finalized the document, and we will forward it to the defense department. Once approved it will be signed in Russia in July,” he said.

The Philippine Navy will also host staff-to-staff talks with their Russian counterparts in Manila in June.

During his meeting with his counterpart, Empedrad said he had raised the Philippine Navy’s need for capability upgrade, but he said it will be further discussed during the staff-to-staff talks.

“They have a lot of capabilities. There are plenty of possible donations, but it depends on the requirements. Based on our talks, they can donate ships that they have decommissioned if there are any scheduled for decommissioning. They can also donate aircraft or other capabilities needed by the Philippine Navy. But they haven’t promised anything and this will be discussed in the next conference between the experts of the Russian Navy and the Philippine Navy,” he said.

Empedrad said Korolyov also invited the Philippine Navy to participate in the fleet review in July.

“But St. Petersburg is too far. It will require 40 days going there and another 40 to go back. We lack ships at the moment; maybe when we have new frigates, we can send ships for the review. But maybe we can send a ship to Vladivostok because there will also be a fleet review there,” he said.

Three Russian vessels made a port call in Manila last January. The Philippine Navy, meanwhile, made its first-ever port visit to Vladivostok in October. /ee