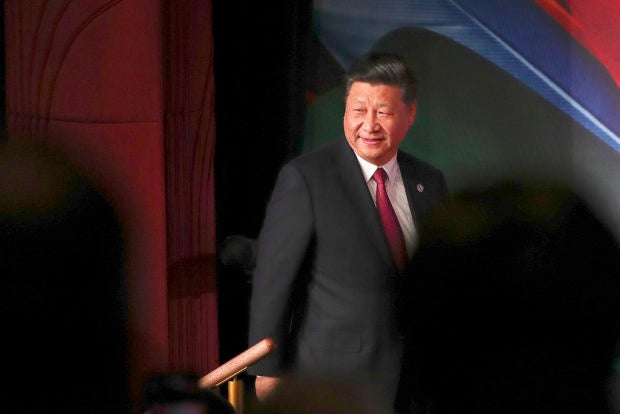 MANILA, Philippines — In an unusual move, two former high-ranking Philippine government officials have filed a case against Chinese President Xi Jinping before the International Criminal Court, saying the “atrocious actions of Chinese officials in the South China Sea and within Philippine territory’’ constitute crimes against humanity that the ICC can prosecute.

Former Foreign Secretary Albert del Rosario and former Ombudsman Conchita Carpio Morales filed the complaint, technically called a communication, on behalf of Filipinos and the hundreds of thousands of Filipino fishermen “persecuted and injured’’ by China’s aggressive island-building and occupation of islands in the West Philippine Sea.

“In implementing China’s systematic plan to take over the South China Sea, President Xi Jinping and other Chinese officials have committed crimes within the jurisdiction of the Court which involve massive, near permanent and devastating environmental damage across nations,’’ the two former officials said in a communication filed with the ICC before the Philippines withdrew from the Rome statute on March 17.

“The situation presented is both unique and relevant in that it presents one of the most massive, near permanent and devastating destruction of the environment in humanity’s history, which has not only adversely affected and injured myriad groups of vulnerable fishermen, but present and future generations of people across nations,’’ they said in the communication.

“This has seriously undermined the food and energy security of the coastal states in the South China Sea, including the Philippines,’’ they added.

They said the grave consequences of the Chinese actions justify the involvement of the ICC as one of its principles provide that “the most serious crimes of concern to the international community as a whole must not go unpunished and their effective prosecution must be ensured.’’

“Though widely publicized, these atrocious actions of Chinese officials in the South China Sea and within Philippine territory remain unpunished, and it is only the ICC that can exact accountability on behalf of Filipinos and the international community, respecting the rule of law,’’ they said.

“We urge you to initiate a preliminary examination on this matter, if only so the Court can apprise itself of Chinese crimes committed not only against the Filipino people but also against people of other nations, which crimes are already known to the international community,’’ they said.

Del Rosario told the Inquirer that the communication was filed at the office of ICC Chief Prosecutor Fatou Bensouda on March 15, two days before the withdrawal of the Philippines from the Rome Statute took effect.  President Rodrigo Duterte ordered the withdrawal after the ICC opened in February 2018 a “preliminary examination’’ of the crimes against humanity case against him in connection with the bloody war on drugs.

Bensouda stood pat on the ICC’s proceedings against Mr. Duterte even after the withdrawal, saying the court “retains its jurisdiction over crimes committed during the time in which the state was party to the statute.’’ Photo obtained by the Inquirer

Del Rosario told the Inquirer their representatives filed the communication with Bensouda’s office well before the Philippine withdrawal took effect.

The communication included a 17-page outline of how Xi and other Chinese officials committed crimes against humanity in “implementing China’s systematic plan to control the South China Sea’’ and included testimonies of Filipino fishermen deprived of their livelihood.

They said the ICC’s preliminary examination can be facilitated by the fact that much of the evidence they presented were widespread, highly publicized incidents of Chinese incursions and included those that were already judicially vetted when the Philippines won the South China Sea arbitration against China at the United Nations Arbitral Tribunal in 2016.

The attachments included photos of Chinese bases that were exclusively published by the Inquirer in February last year.

In filing the case, Del Rosario and Morales presented documented cases of Chinese blockade of fishermen in the disputed waters, Chinese destructive fishing activities and dozens of instances where China built military installations on contested islands.

They cited the 1987 China installation of a weather radar in Fiery Cross, seizure of Subi Reef in 1988, occupation of Mischief Reef in 1995 and of Scarborough Shoal in 2012, as well as occupation of islands claimed by Vietnam and Malaysia. They said that from 2013, China has started massive illegal reclamations and building of air and naval bases on seven features in the Spratlys. They said one of the military bases has an anchorage larger than Hawaii’s Pearl Harbor.

The case named as “perpetrators’’ Xi, President and leader of China’s Communist Party, foreign minister and state councilor Wang Yi (as primary promoter of China’s plan in the South China Sea, and as such he defends, promotes and facilitates the crimes) and Zhao Jinhua, Chinese ambassador to the Philippines.

They said Xi has been reported to have, over the past several years, “ordered engineers to pile sand onto some of the sea’s disputed offshore reefs, mostly in the Spratlys, with the apparent goal of building military bases these.’’ Under Xi’s command, they said, Beijing has “provided military training and sophisticated communication technology to its fishermen so they can call in the coast guard if they have a run-in with a foreign law enforcement vessel or alert the coast guard of the presence of fishermen from other countries.’’

They said that Zhao wrote in a local paper that China and the Philippines are “separated by only a narrow strip of water, and have been close neighbors for centuries.’’

“This is a continued assertion of China’s unlawful and expansive nine-dash line claim in the South China Sea because the Philippines and China are not ‘separated by only a narrow strip of water’ but instead, by a distance of approximately 580 nautical miles…’’ they said.

They said China’s blockade against Filipino and other fishermen, and tolerance of illegal, unreported and unregulated fishing by the Chinese, directly caused food and livelihood deprivation to as many as 350,000 Filipino fishermen.

They cited the testimonies of fishermen Crispen Talatagod, Tolomeo Foreones and Jowe Legaspi earlier submitted to the UN arbitral tribunal.

They said the Chinese actions would result in a “fisheries collapse’’ and food shortage over several nations around the disputed waters.

Del Rosario was head of the Department of Foreign Affairs from 2011 to 2016 when the Philippines filed and won a case an arbitration case against China. The tribunal affirmed the Philippines’ “exclusive sovereign rights over the West Philippine Sea’’ and invalidated China’s nine-dash line in the disputed South China Sea. Morales was Ombudsman from 2011 to 2018.  Both have incurred the ire of Mr. Duterte for their strong stand against issues that are sometimes against his policies. 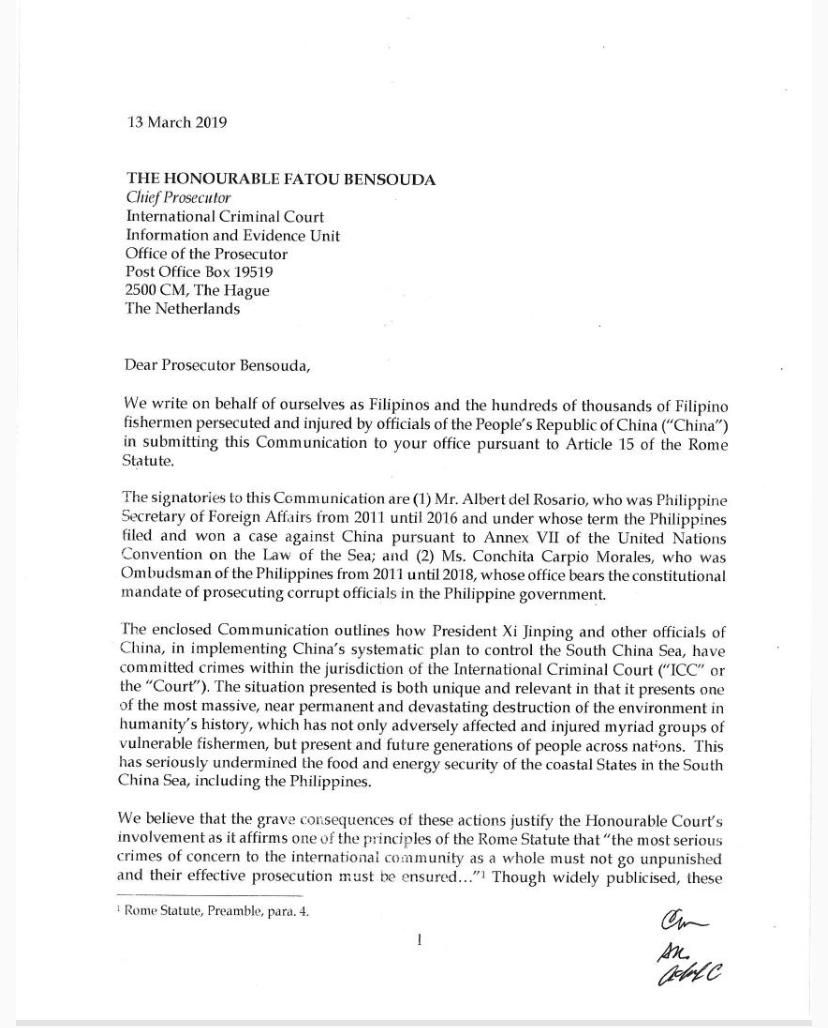 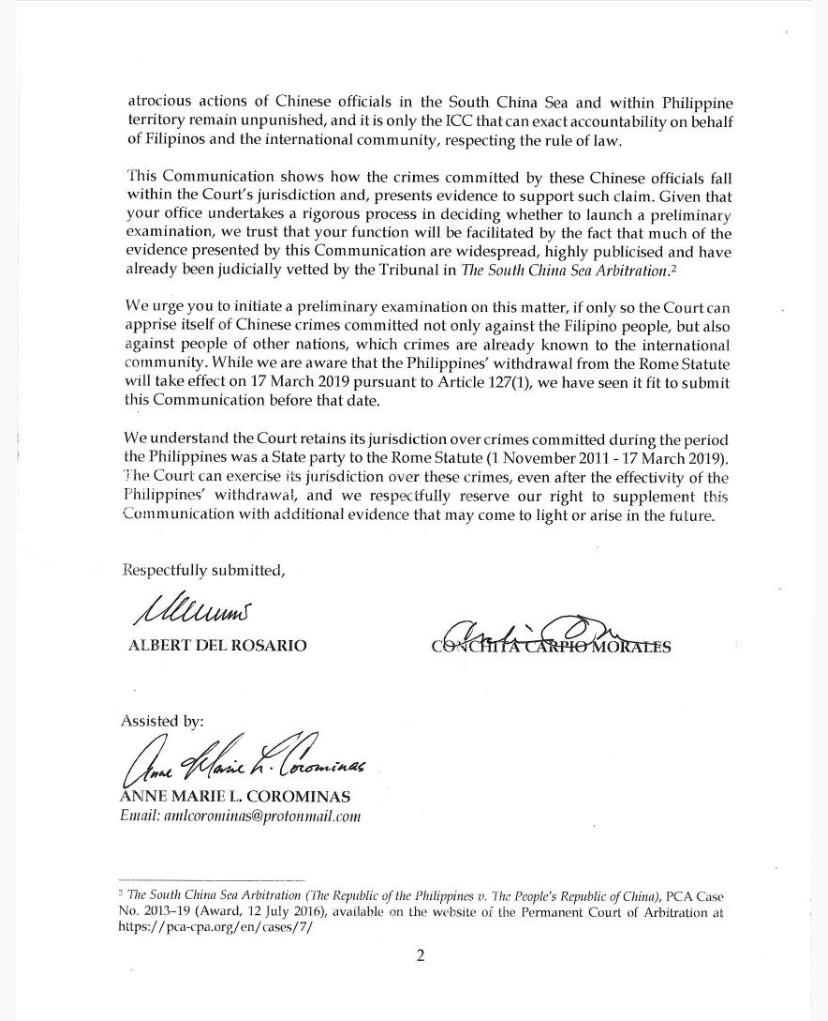