Locsin to ‘renew’ friendship with China’s top envoy during visit 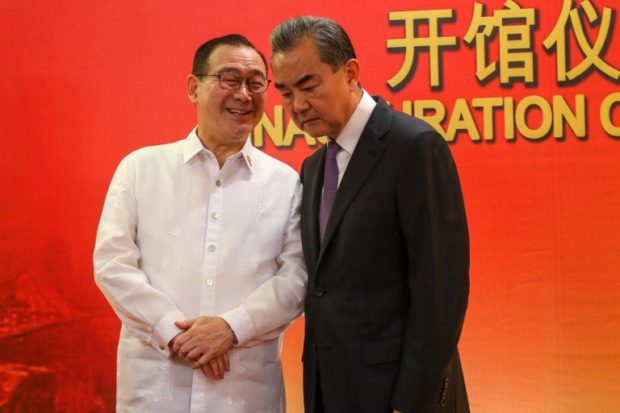 MANILA, Philippines — Moments before Foreign Affairs Secretary Teodoro Locsin Jr. flew to China for his four-day visit there, he said he would like to “refresh” and “renew” his friendship with his Chinese counterpart.

“Foreign Minister Wang Yi and I get along famously when he came to Davao and I’d like to renew and refresh that friendship. We understand each other very well,” Locsin told reporters after the kick-off ceremony of the 7th Biennal Conference of the Asian Society in Pasay City on Monday.

It was in October last year when Locsin and Wang, who is also the Chinese state councilor, had a bilateral meeting in Davao City.

Locsin flew to China today, March 18, marking the start of his first official visit there as the Philippines’ top diplomat. His visit will last until March 21.

The Department of Foreign Affairs (DFA) had earlier said that Locsin and Wang would engage in bilateral talks to discuss the “strengthening of the friendly relations between the Philippines and China in the spirit of mutual respect and through enhanced functional cooperation.”

“Beyond mutual benefit across the broad scope of bilateral engagement, both Ministers will also discuss ways to advance the larger goal of bringing about peace and prosperity to the region,” the DFA added.

READ: DFA’s Locsin to embark on 4-day visit to China

Locsin also said that he hoped to bring home with him a mutual understanding of issues affecting both countries.

A reporter asked him what “fruits‘ he hoped to bring back from his visit to China.

“I don’t look for fruits, I look for understanding,” he said. “That’s the most important part that the foreign minister and I are able to share our views freely.”