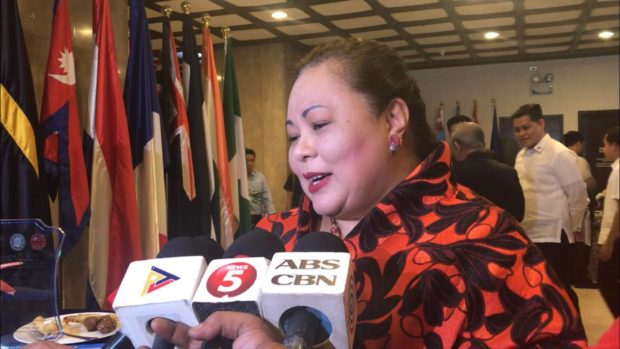 University of the Philippines (UP) professor Elizabeth Aguiling-Pangalangan explains her stand on the withdrawal of the Philippines from the International Criminal Court after the kick-off ceremony of the 7th Biennal Conference of the Asian Society in Pasay City on March 18, 2019. PHOTO by Christia Marie Ramos/INQUIRER.net

MANILA, Philippines — The Philippines’ decision to withdraw from the International Criminal Court (ICC) was rather “shortsighted,” a law professor from the University of the Philippines said on Monday.

After the kick-off ceremony of the 7th Biennal Conference of the Asian Society in Pasay City, Elizabeth Aguiling-Pangalangan told reporters that the Philippines should not have withdrawn from the Rome Statute, the treaty that created the ICC.

“I believe that we acceded to the statute in order to provide protection for Filipinos in case of atrocities and this was rather shortsighted, I would say, because maybe now we don’t think that it should be a used, but how about in the future?” she said in an ambush interview.

“So I don’t believe again that we should have withdrawn. But again, that’s my own opinion, and it was left to…the secretary himself said that he took ourselves out of the ICC,” she added, referring to Foreign Affairs Secretary Teodoro Locsin, Jr.

Locsin had served the formal notice of the “unilateral withdrawal” from the ICC.

This was after President Rodrigo Duterte announced the country’s withdrawal from the international court a month after the ICC said it opened a “preliminary examination” in February 2018 on allegations that Duterte had committed crimes against humanity.

With the country’s withdrawal from the ICC, Aguiling-Pangalangan, whose husband Raul Pangalangan has been a judge at the ICC since 2015, said that it would be a challenging process to bring the Philippines back to the Rome Statute if another administration decides to do so.

“Well, the Philippines can sign it again, but we have to go through ratification. That’s the sad part,” she said.

“It took a while before the Senate ratified. Now that we’ve withdrawn and it has become effective,  we may sign it in the future, but it has to go through ratification again. So, mahirap (It’s difficult),” she added.

The Philippines’ withdrawal from the ICC took effect on Sunday, following the Supreme Court’s failure to issue a ruling on the consolidated petitions filed by six opposition senators and the Philippine Coalition for the International Criminal Court led by former Commission on Human Right (CHR) chairperson Loretta Rosales. /ee