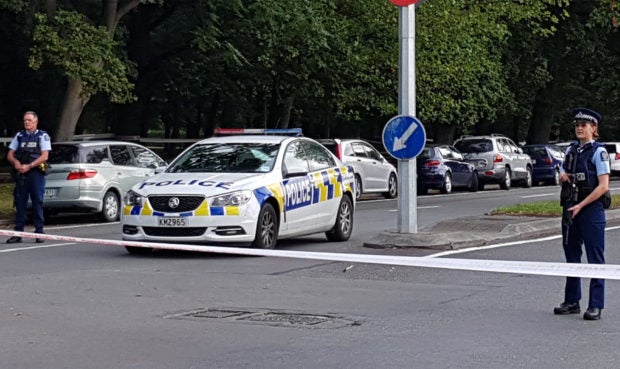 Police officers cordon off the area close to the mosque after a gunman filming himself firing at worshippers inside in Christchurch on March 15, 2019. – A gunman opened fire inside the Masjid al Noor mosque during afternoon prayers, causing multiple fatalities. (Photo by Flynn FOLEY / AFP)

At least nine people were reportedly killed after a gunman opened fire at crowded mosques in Christchurch on Friday morning.

The city was also placed in a lockdown as the police hunted an “active shooter.”

The DFA said Ambassador Jesus Gary Domingo is coordinating with the Philippine Honorary Consulate in Christchurch and leaders of the Filipino community.

It added that the embassy has advised the almost 5,000 members of the Filipino community in Christchurch to stay indoors.

“The Philippines stands in solidarity with New Zealand following the tragic shootings in Christchurch this morning,” the DFA said in a statement.

“Our thoughts and prayers are with the loved ones of those who lost their lives in the tragedy,” it added.  /je