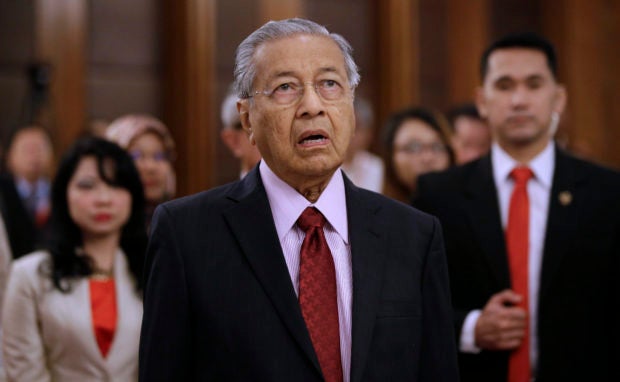 MANILA, Philippines — Malaysian Prime Minister Mahathir Mohamad said Thursday that China should define its “so-called ownership” in the disputed South China Sea so other claimant countries can start to gain benefits from the resource-rich waters.

Mahathir stressed the importance of freedom of navigation in the busy waterway, saying in an interview with ABS-CBN network in Manila that if there were no restrictions “the claims made by China will not affect us very much.”

Malaysia, the Philippines, China, and three other governments have been locked in long-simmering territorial disputes in the South China Sea. China has claimed virtually the entire sea but has refused to define the extent of its claims except for a vague line with nine dashes on its maps, complicating the disputes.

Efforts by the Philippines, for example, to explore for undersea deposits of oil and natural gas in the Reed Bank west of its Palawan island province has been stymied for years by Chinese protests and claims to the offshore region. The Philippines has declared a moratorium on exploration in the area in the past because of Chinese threats to block any such exploration.

“We have to talk to China on the definition of their claims and what is meant by their ownership or so-called ownership they claim to have so that we can find ways of deriving some benefits from them,” Mahathir said.

“I think that whatever may be the claim of China, the most important thing is that the South China Sea in particular must be open to navigation,” Mahathir said. “There should be no restriction, no sanction and if that happens, then I think the claims made by China will not affect us very much.”

Mahathir is visiting Manila for talks with President Rodrigo Duterte and other top officials, who are to thank Malaysia for brokering peace talks between the Philippine government and Muslim guerrillas in the south, homeland of minority Muslims in the largely Roman Catholic nation. The rebels have become governors of a new Muslim autonomous region in the country’s south under a peace deal.

The Malaysian leader, who at 93 is the world’s oldest prime minister, has visited the Philippines as his country’s premier in 1987 and 1994.

“I’m glad to see that, at last, peace has come to the southern Philippines. Development cannot take place in war. In war, we destroy but in peace we build,” Mahathir told a business forum in Manila.

Amid the enormous economic opportunities that have opened up in former battlefields, Mahathir said Malaysia was looking forward to investing in the region.

The first large group of about 12,000 combatants is expected to be demobilized starting this year under the deal.

The Philippine and Western governments and the guerrillas see effective Muslim autonomy as an antidote to nearly half a century of Muslim secessionist violence, which the Islamic State group could exploit to gain a foothold in the region.