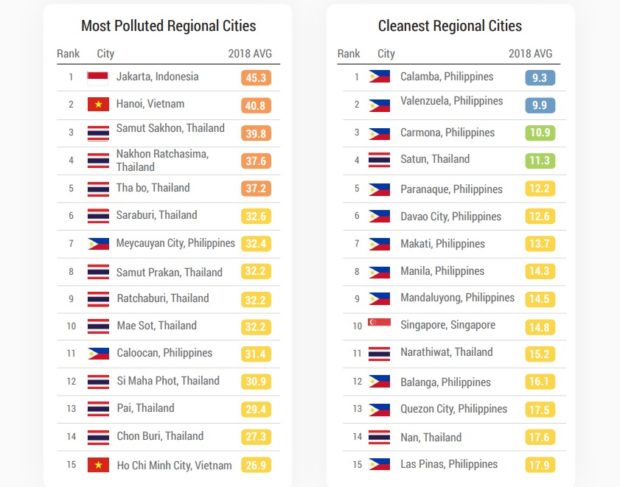 MANILA, Philippines – Calamba City in Laguna province ranked first among the 15 cities with the cleanest air Southeast Asia (SEA) in 2018, a study revealed.

Meanwhile, two Philippine cities, namely Meycuayan in Bulacan and Caloocan in Metro Manila, were among 15 cities in SEA with the most polluted air.

The study from the Swiss-based IQ AirVisual examined measurements of particulate matters known as PM2.5 that can penetrate the human respiratory system causing a wide range of health effects.

The report showed that Calamba City in Laguna ranked first among the cities in SEA with the cleanest air with a PM2.5 concentration (µg/m³) of 9.3 last year.

It was followed by Valenzuela City with an average of 9.9 µg/m³ and Carmona City in Cavite with a 10.9 µg/m³ level.

Meanwhile, among the SEA cities with the dirtiest air, Meycauayan City ranked seventh with 32.5 µg/m³ in 2018, while Caloocan placed 11th with 31.4 µg/m³ level.