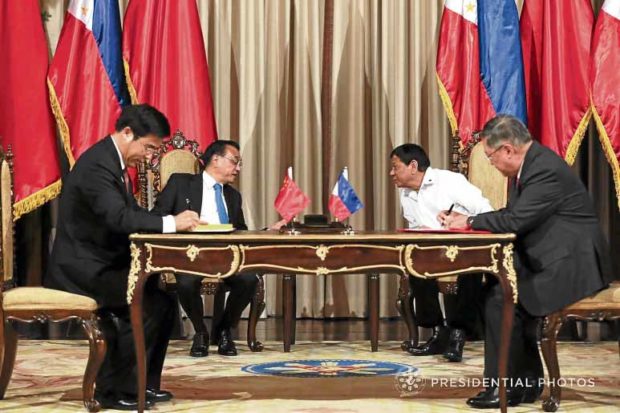 A socioeconomic research outfit raised more questions about the terms of Beijing’s P3.2-billion funding of the Chico River Pump Irrigation Project at a Senate hearing on Tuesday, as Sen. Sherwin Gatchalian called for transparency on China’s loans to the Philippines.

Ibon Foundation’s top researcher, Rosario Bella Guzman, said the Department of Finance (DOF) had invoked a confidentiality clause when the group tried to get a copy of the loan agreement for the Chico River project last year.

Guzman also said the deal had “void and voidable” provisions, aside from the ones earlier raised by former Bayan Muna Rep. Neri Colmenares.

Its decision will be final and binding on both parties, Guzman said.

Ibon is trying to check if the Philippines would have to give up patrimonial assets in case of an arbitration, she said.

She lamented the presence of a “confidentiality clause” in the agreement, which the DOF invoked when Ibon Foundation tried to get a copy of the deal.

The DOF said the clause prohibited it from releasing loan details to any third party.

Ibon tried to get a copy from other government agencies, “and in their reply, they told us to Google it,” she said. “This is public interest, this is public infrastructure.”

Gatchalian, who chairs the economic affairs committee, does not agree with the confidentiality provision. He said the government should be more transparent about the loan deal with China, given the doubts about it.

“That’s the biggest lapse of the [National Economic and Development Authority and the DOF]. We know that there are many concerns about loans coming from China,” the senator said.

The public should be able to understand the loans, especially since it would pay for these, he added.

As for the interest rates charged by China, Gatchalian said that 2 to 3 percent was not that high, considering that the rates for loans from the World Bank and Asian Development Bank were more than 3 percent.

Loans from Japan have a 0.10 percent rate, but as explained by the DOF, the Philippines could not tap it for all of the country’s needs. There are only so many projects Japan could fund, Gatchalian noted.

Finance Assistant Secretary Edita Tan said there was no exact science when it came to deciding where to tap loans. “It’s an art. We have to read the market,” she said.

What the DOF does is to look at the terms of the comparative advantage of one over the other, Tan said. For instance, some projects are better drawn from a particular official development assistance partner because of its expertise, she said.

“There should be a good match between your requirements and what they’re providing,” the official said.

With regard to the condition that China would supply the contractors for the projects it would fund, Gatchalian said this was normal with “tied loans.” Other countries impose the same condition, he said.

So far, the Philippines has signed two loan agreements with China. Seventeen more projects for China funding are in the pipeline.

Gatchalian does not see the Philippines falling into a China “debt trap” like other countries who fell into the situation after they kept on borrowing money without the ability to pay, or used their resources as collateral for the loans.

“In this case, our debt to GDP (gross domestic product) ratio is quite healthy,” he told reporters. “And second, in the loan agreements in the past, I did not see any of our assets or our resources being pawned.”

The Philippines’ loan portfolio is intentionally diversified so that it won’t be reliant on just one country, he said.