Chinese fishing vessels are driving Filipino fishermen away from a string of sandbars close to Philippine-occupied Pag-asa Island in the South China Sea, according to a Philippine official.

Mayor Roberto del Mundo of Kalayaan — a town in Palawan from which Pag-asa, internationally known as Thitu Island, is administered — said Filipino fishermen were being driven away by Chinese vessels whenever they came anywhere near the closest sandbar to Pag-asa, located about 3 kilometers from the island.

There are three sandbars between Pag-asa and Philippine-claimed but China-controlled Zamora Reef, known by its international name Subi.

These sandbars have emerged only in recent years and are part of Pag-asa’s 22-km territorial sea.

“The presence of Chinese boats is now affecting our fishing activities. It wasn’t that way before. When our fishermen is about to get near Sandbar 3, that is really our fishing ground, a Chinese vessel would immediately come up to us to ward us off so we can’t come closer,” Del Mundo told Inquirer.net in an interview last week.

“But there’s no harassment, as some say, you just can’t go [to] the nearest sandbar. I don’t know the reason why they do that, to think that’s supposed to be ours,” he said.

A zoomed-in photo taken on Jan. 31 this year showed about a dozen Chinese civilian vessels off one side of Pag-asa.

“When I stayed there from Jan. 11 up to Feb. 2, their number increased. I counted around 50 vessels on the left side of the island… The Chinese are only staying around the shallow part of sandbars because they can’t occupy the sandbar itself because it would damage their boats,” Del Mundo said.

He said he had yet to report the new incidents to the Western Command, the military sector responsible for the Philippine claims in the South China Sea.

“It means they think they own it because they refuse to leave. If they’re just really fishing, they can leave for Subi Reef and then come back, but they no longer leave,” he added.

To avoid risking confrontation, the mayor said some of the Filipino fishermen would instead explore the fishing grounds located on the other side of the island, where the catch is just as abundant.

Magdalo Rep. Gary Alejano, a former military officer, was the first to report the presence of Chinese vessels near Pag-asa and the harassment of Filipino fishermen in 2017, but the government dismissed the reports as untrue.

In the same year, President Rodrigo Duterte ordered the military to stop the construction of a shelter supposedly for Filipino fishermen on Sandy Cay, one of the three sandbars, after China protested because of a previous agreement not to occupy new features in the South China Sea.

“I don’t know the purpose of the boats close to us. There are four or five boats within 500 meters. Maybe they are monitoring our construction projects — the port and a beaching ramp of the [local government] and [the] AFP (Armed Forces of the Philippines),” Del Mundo said.

He was referring to the ongoing development work to build a beaching ramp and sheltered port, which is expected to be completed early this year.

The ramp will be used for the delivery of bigger equipment and materials for the long-overdue repair of the island’s runway and other facilities.

It has refused to acknowledge the 2016 ruling of the UN-backed Permanent Court of Arbitration in The Hague, which invalidated its claim and declared it had violated the Philippines’ sovereign right to fish and explore resources in the West Philippine Sea, waters within the country’s 370-km exclusive economic zone in the South China Sea.

But President Duterte, who came to power two weeks before the ruling came down, decided not to assert the Philippines’ victory in its challenge to China’s sweeping claim to pursue warmer ties with the Asian economic powerhouse in exchange for aid, loans and investments. 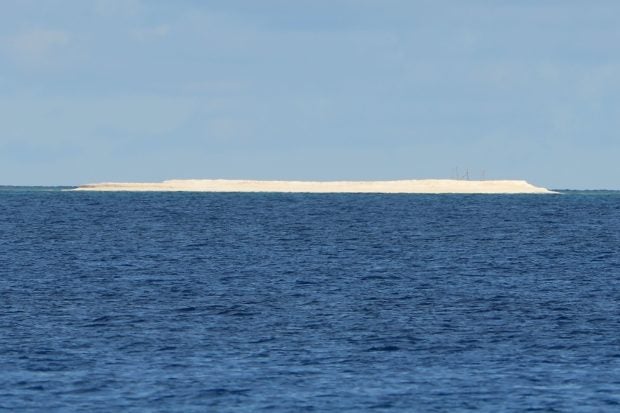 A SANDBAR TOO FAR One of the three sandbars between Pagasa and Philippine-claimed but China-controlled Zamora Reef. —AFP

“That’s why it’s somewhat frustrating because we won the arbitration case. It’s ours. We are the ones supposed to be chasing them away, but it’s the other way around. We should be the ones driving them away [because] it’s ours, but we can’t do anything about it,” Del Mundo lamented.

Satellite images released by Washington-based think tank Asia Maritime Transparency Initiative (Amti) in early February showed that China deployed navy and coast guard vessels along with dozens of fishing boats in the past month and a half near Pag-asa, likely in response to the ongoing construction.

The number of vessels reached as high as 95 in December but it was down to 42 by late January, nearly corroborating Del Mundo’s account.

Maritime expert Jay Batongbacal said the use of fishing boats against Filipino vessels was an example of China’s gray zone strategy.

In this tactic, civilian vessels are used “to avoid direct responsibility by arguing that these are [not government] vessels,” Batongbacal said.

“These are ostensibly civilian fishing vessels [used] to either intimidate or discourage our vessels from coming too close,” he said.

“A deliberate blocking could be contrary to good seamanship and international norms… This could be similar violations of international law, as what China deemed to have violated in the arbitration,” he added.

Senior Associate Justice Antonio Carpio, a South China Sea expert and one of the leading figures in the Philippines’ arbitration victory against China, said the government should not stay quiet on the issue.

“The DFA [Department of Foreign Affairs] should protest to preserve our sovereignty since sandbars emerged within our territorial sea,” he said.

He warned if China would permanently take the sandbars, the Philippines would stand to lose a third of territorial sea of Pag-asa, which is three times larger than Quezon City.

In another development, an unidentified low-flying helicopter flew over Pag-asa Island one evening in January, according to Del Mundo.

Stunned residents and even the military stationed on the island went out of their houses and barracks when they heard a loud noise coming from the helicopter, he narrated.

“On January 22 at 7 in the evening, I personally witnessed a helicopter that flew over the island. It did not flash a spotlight (searchlight)… It happened fast; it made a few rounds and then it left,” Del Mundo said.

The mayor recounted that the low-flying helicopter flew “a little higher” than their tower, which measures not more than 100 feet.

The Philippine military conducted an air patrol the next day after the incident, he said.

“We were nervous because it might erupt into something. But we just stared at it until it left. It went towards Subi (Zamora) Reef but we’re not sure if it landed there. It headed towards Subi because on the other side there’s nothing there,” he said.

Zamora Reef, one of China’s biggest outposts in the Spratly Islands, is less than 15 nautical miles (almost 28 km) from Pag-asa Island.

INQUIRER.net asked defense and military officials for comment, but they have yet to respond as of this writing.

Those knowledgeable on flight operations there said that Philippine military aircraft had limited capability for night flying over the disputed waters and the poor condition of the runway would make it dangerous for landing, especially at night.

Despite the crawling presence of China on Pag-asa Island’s doorstep, the mayor said they would continue to stay put.

“Our residents have endured so much. They are very much willing to fight and die there. They have sacrificed with their families to live there — their children and grandchildren are there. They aren’t daunted even if the Chinese are just near,” he said.