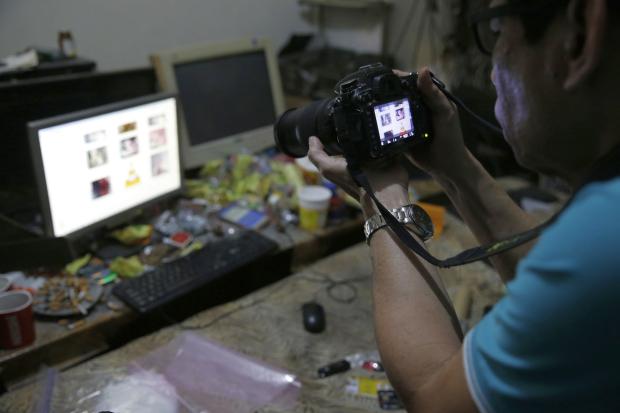 In this photo, taken April 20, 2017, a member of the National Bureau of Investigation takes a picture of the computer of suspected child webcam cybersex operator, David Timothy Deakin, from Peoria, Illinois, during a raid at his home in Mabalacat, Philippines. Deakin’s arrest reveals one of the darkest corners of the internet, where pedophiles in the US, Canada, Europe and Australia pay facilitators on the other side of the world to sexually abuse children, directing their moves through online live-streaming services. AP FILE

STRASBOURG, France – A man has been charged with ordering videos of rapes and sexual assaults, some of them on children, broadcast live from the Philippines, a French prosecutor said on Saturday.

The suspect, a 55-year-old former police officer according to L’Est Republicain newspaper, was being held for conspiracy to commit rape and sexual assault on someone under 15 years of age, Francois Perain, prosecutor in the eastern city of Nancy, told AFP.

French officials were tipped off by the investigators at the US Department of Homeland Security of the activities of a French national between 2017 and 2018, said Perain.

They had picked up the trail after equipment seized in a raid on a suspect in the Philippines yielded evidence of the live-streamed sexual assaults.

The system involved broadcasting the assaults live and charging people to view them and the victims, some of whom were children, said the prosecutor.

Using online chatrooms, clients placed orders specifying the profile of the victim and how they wanted them to be assaulted and paid $15-60.

Although some videos are broadcast pre-recorded, others are broadcast live so the person who ordered it can influence what happens in real time, said Perain.

The suspect admitted to investigators that he had paid for such videos but said very few of them had involved minors, the prosecutor added. /cbb