Pompeo: ‘We remain committed to supporting the Philippines’ in South China Sea row

MANILA, Philippines – Secretary of State Mike Pompeo on Friday reassured the Philippine government of the United States’ support amid the ongoing dispute in the South China Sea.

“Our commitments under that treaty (U.S.-Philippines mutual defense treaty) are clear, our obligations are real, the South China Sea is certainly part of an important body of water for freedom of navigation,” Pompeo said in a press conference at the Department of Foreign Affairs main office in Pasay City. 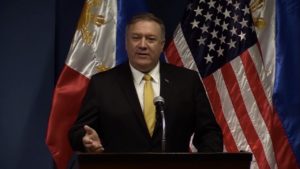 U.S. Secretary of State Mike Pompeo answers questions from the media during a press conference at the Department of Foreign Affairs main office in Pasay City on Friday, March 1, 2019. Pompeo has given reassurance that the U.S. remains committed to supporting the Philippines in the maritime dispute at South China Sea. INQUIRER.net/Ryan Leagogo

“We remain committed to supporting the Philippines in that effort, and the Philippines need to do its part as well, and all the countries of the region so that these incredibly vital economic sea lanes are open,” he added.

He further said that any “armed attack” on the Philippine forces in the South China Sea “will trigger mutual defense obligations” of the U.S. to the Philippines.

Meanwhile, Presidential Spokesperson Salvador Panelo added that the U.S. has not only assured the Philippines that it will come to its aid in the event of a shooting war in the South China Sea, but will also be supplying arms and other needed military equipment needed for its defense.

“By just saying that ‘we have your back,’ that means we are behind you, we will support you,” Panelo said.

“According to them, when there is an attack on us they will be protecting us or helping us in our defense. Number two, they will be providing us with arms,” he added.  Darryl John Esguerra /kga/muf