MANILA, Philippines – Foreign Affairs Secretary Teodoro Locsin, Jr. on Friday said he does not see the need to review the mutual defense treaty between the United States and the Philippines.

“My own view is no,” Locsin said when asked if the Philippines is seeking a review of the US-Philippines mutual defense treaty during a press conference at the Department of Foreign Affairs main office in Pasay City. 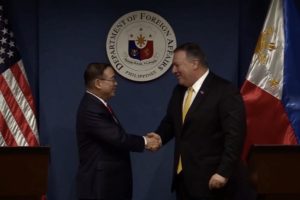 “I believe in the old theory deterrence… in vagueness lie the best deterrence,” he added.

Locsin said the government is “assured” and “confident” on the guarantees that the US has given the Philippines in relation to the protection of Philippine interests in the South China Sea.

“We are very assured, we are very confident that the United States, as in the words of Secretary Pompeo and the words of President Trump to our President, ‘We have your back’,” Locsin said. /kga