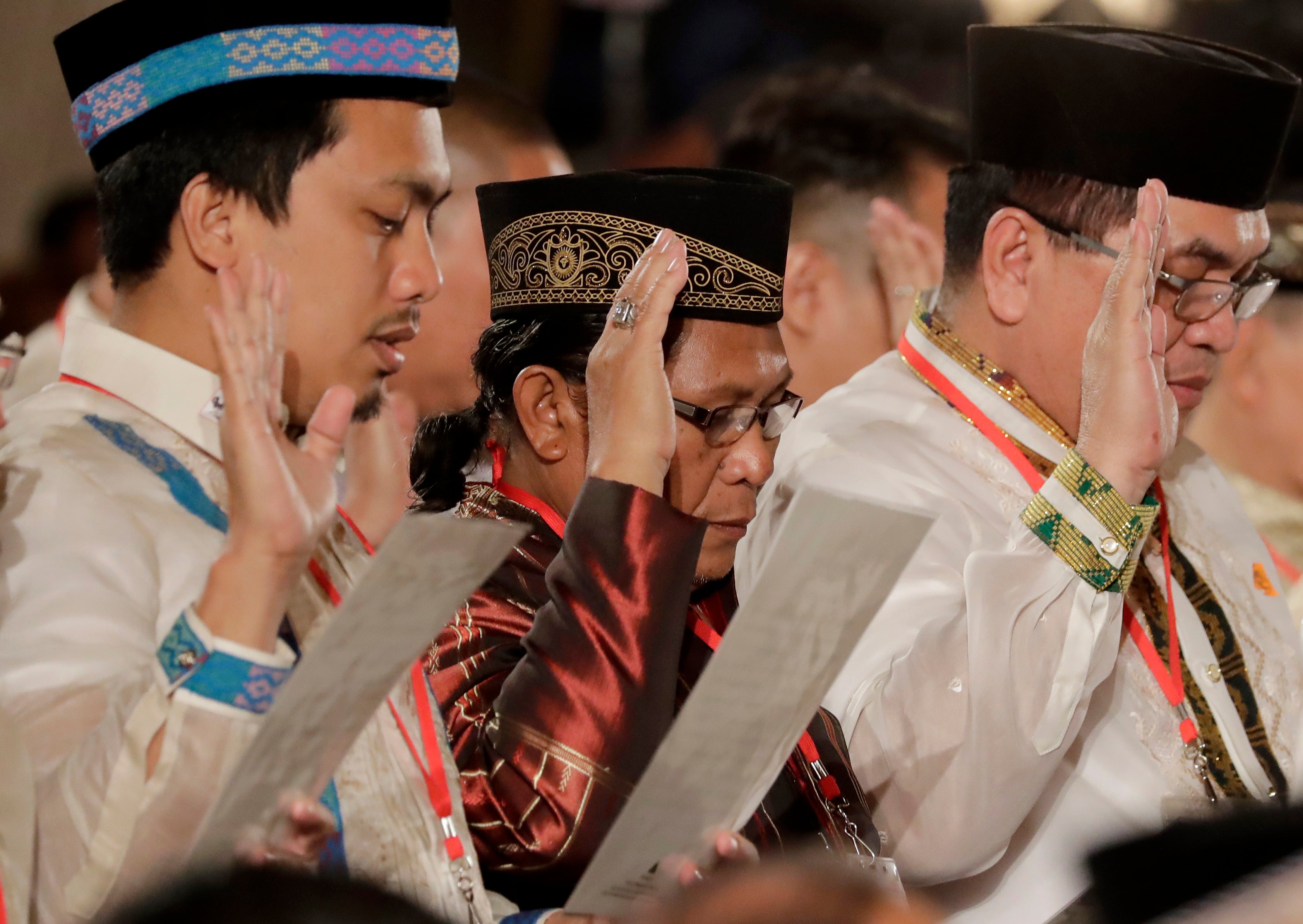 Abdullah Macapaar, center, who uses the nom de guerre Commander Bravo, along with some of the fiercest Muslim rebel commanders in Mindanao , takes his oath during a ceremony for the creation of the Bangsamoro Transition Authority or BTA at the Presidential Palace in Manila Friday, Feb. 22, 2019.  (AP)

MANILA, Philippines–UN Secretary-General Antonio Guterres hailed the establishment of a new Bangsamoro autonomous region as a “landmark achievement on the road to lasting peace” in Mindanao.

Stéphane Dujarric, spokesman for the Secretary-General, conveyed Guterres’ congratulatory message to the Philippine government, the Moro Islamic Liberation Front, the Bangsamoro Transition Commission, civil society groups and local communities as Manila handed over Friday the reins of the new Muslim-led territory to rebel leaders who waged a decades-long fight for autonomy.

“This is a landmark achievement on the road to lasting peace in the Southern Philippines, as well as a historic occasion for all people from the Philippines,” said Dujarric in a statement sent from the UN Headquarters in New York Friday (Saturday in Manila).

It comes after voters decisively backed in January the founding of the so-called Bangsamoro region in the south, the culmination of a peace deal to end a separatist insurgency that had killed some 150,000 people since the 1970s.

Dujarric said the United Nations “will continue to support the Philippines in the implementation of the Bangsamoro Organic Law, and to help build the capacity of the Bangsamoro Transition Authority to achieve peace, democratic governance, and respect for human rights.”

Murad and his transition body will form a cabinet as well as pass laws until the temporary arrangement ends with the election of a regional parliament in May 2022.

During Murad’s term some of his more than 10,000 armed fighters are expected to gradually disarm under the terms set by the peace treaty.

The rebellion began in the early 1970s as a bid to set up a separate Muslim state in the Mindanao region. The rebels later scaled down their objective to autonomy.

In May 2017, hundreds of foreign and local pro-IS gunmen seized Marawi, the country’s largest Muslim city.

The Philippine military wrested back the ruined city after a five-month battle that claimed more than a thousand lives.