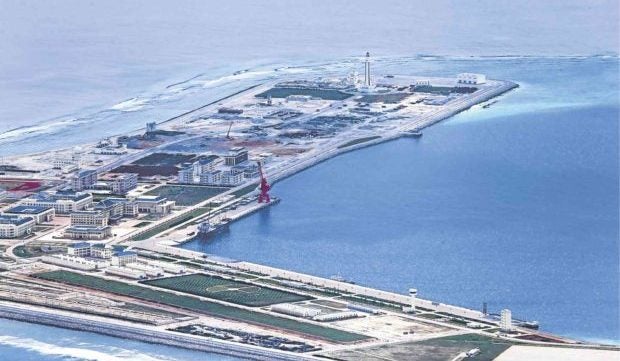 MANILA, Philippines — National Security Adviser Hermogenes Esperon Jr. is calling for “internationalizing” the features held by each of the claimants in the South China Sea.

By this, he meant that “there could be access by others especially between China and Asean” to all the occupied outposts in the disputed waters.

“We are making a study now on what it would bring if we internationalize the features…I am personally not against having visitors from Malaysia, Indonesia and other Asean countries to Pagasa Island (Thitu), including China. For example, [there we could] have marine biological researchers or any studies that would benefit everyone,” he told reporters on Saturday on the sidelines of the Philippine Military Academy alumni homecoming in Baguio City.

He said China’s deployments in the disputed waters have caused “unbalance” as it sent not only its military but also its coast guard and civilian vessels.

Esperon said he would also be pushing for the “demilitarization” of the features occupied by all the claimants in the disputed waters.

“I am for all reducing military presence. There is an ongoing talk on the code of conduct led by no less than the President between China and Asean so I hope, many more of non-military matters will be discussed ore cooperation on non-military matters like safety of life at sea, research and the like. The overall objective is to demilitarize the area,” he said.

China has transformed seven reefs in the Spratly archipelago into a sprawling military outpost in recent years. Three of these artificial runways have runways, anti-ship and surface-to-air missiles, and radar jamming equipment.

According to the latest report of the Asia Maritime Transparency Initiative, China has created 3,200 acres (1,295 hectares) of land in the Spratlys, while Vietnam has 120 acres (49 hectares) and the Philippines has 8 acres (3 hectares).

Esperon also expressed support for the freedom of navigation operations of non-claimants in the South China Sea, as long as ships would not sail “near contested areas” as “it can become a source of more tension.”

“A call for access to each other’s facilities under equal terms and no prejudice, with a commitment not to take undue advantage thereof, would be a better and more substantial confidence-building measure than just signing paper agreements,” he told Inquirer.net.

“We already demonstrated this with Vietnam. This is especially true for facilities that supposedly provide public goods,” he added.

He also said reducing military deployments would be “a better measure of trust-building.” But he said: “Whether it is possible depends entirely on the other side.” /atm