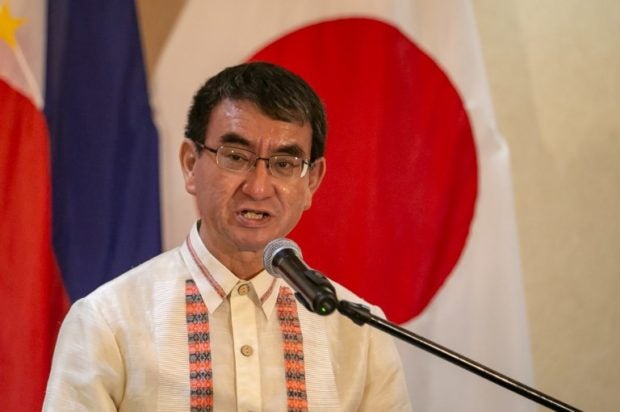 Japanese Foreign Minister Taro Kono gives a statement during an expanded bilateral meeting with the Philippines in Davao, in the southern island of Mindanao on February 10, 2019. AFP

MANILA, Philippines – Japan has renewed its commitment to the Philippines to fight terrorism in the country following the explosions that rocked Mindanao in January.

Japan Foreign Minister Tarp Kono made this assurance during his meeting with President Rodrigo Duterte in Davao City on Saturday.

Presidential Spokesperson Salvador Panelo said Kono “personally conveyed the warm wishes and message of Prime Minister Shinzo Abe to the President, as well as Japan’s commitment to further deepen and expand cooperation with the Philippines.”

“FM Kono likewise conveyed PM Abe’s grave concern over the twin explosions in Jolo, Sulu, and expressed Japan’s condemnation of the terrorism and violent extremism and their commitment to assist the Philippines in combatting the scourge of terrorism,” Panelo said in a statement on Monday.

During that hour-long meeting, Panelo said Kono reiterated “Japan’s sustained support for the Philippines’ quest for just and lasting peace and development in Mindanao, extended felicitations for the success of the holding of the Bangsamoro Organic Law plebiscite and expressed Japan’s commitment to rehabilitate and reconstruct Marawi and develop ARMM, including the funding of the Road Network Development Plan for ARMM.”

Kono, Panelo said, also “recognized the Philippines’ contribution to the socio-economic development of Japan and conveyed Japan’s plan to open up its labor market for qualified Filipinos.”

The Palace official said Duterte thanked Kono for the visit to Davao City and hailed the inauguration of Japan’s Consulate General in the city, which he described as “significantly expanding Japan’s presence and ties in the southern Philippines.”

“The President likewise lauded Japan — which he described as a true friend and proven partner– for its involvement in the Philippines’ Build, Build, Build program, and highlighted the quality of the infrastructure projects, as well as the transfer of technology and training embedded in the projects that would benefit Filipino practitioners and experts,” he said.

“The President further expressed his desire to meet PM Abe again to discuss developments in bilateral ties and assess ways of moving forward together on shared concerns,” he said. /cbb