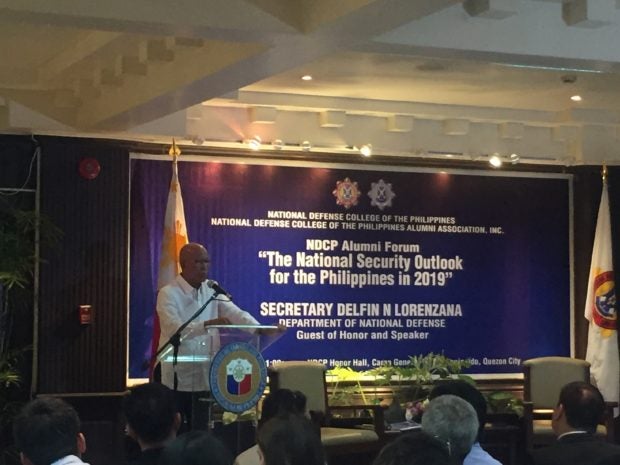 In a turnaround, Defense Secretary Delfin Lorenzana said he agreed with Foreign Affairs Secretary Teodoro Locsin Jr.’s call to contest the construction of the rescue station.

“Initially, I said ‘what’s wrong with the rescue stations?’ in a way that’s for humanitarian purposes…But I think I agree with Secretary of Foreign Affairs that we should protest only because we don’t want them to keep building things there…and it will become theirs,” he said at a forum at the National Defense College of the Philippines at Camp Aguinaldo on Monday.

“We should protest to let them know any development they continue to do there is protested by us because we believe Mischief Reef, Fiery Cross and all the islands they built there within our EEZ (exclusive economic zone) is under our EEZ,” he said.

Last week, China announced that it had launched a maritime rescue center on Kagitingan Reef, one of its seven man-made bases in the Spratly Islands.

In a Twitter post on Saturday, Locsin said he would “not contest, but protest” the construction of the rescue center, but preferred to do it on the floor of the United Nations General Assembly.

“And we will. I, however, preferred engaging them openly on the floor of the UN General Assembly,” he said.

Malacañang earlier said that the Philippines should be “thankful” for the rescue facility.

Senior Associate Justice Antonio Carpio also called for the need to protest China’s recent activity as the occupation and use of the islands are acts of sovereignty.

“If we impliedly or agree to such act of administration by China, we are helping China strengthen their sovereignty claim to Fiery Cross to our own prejudice,” he said. /je