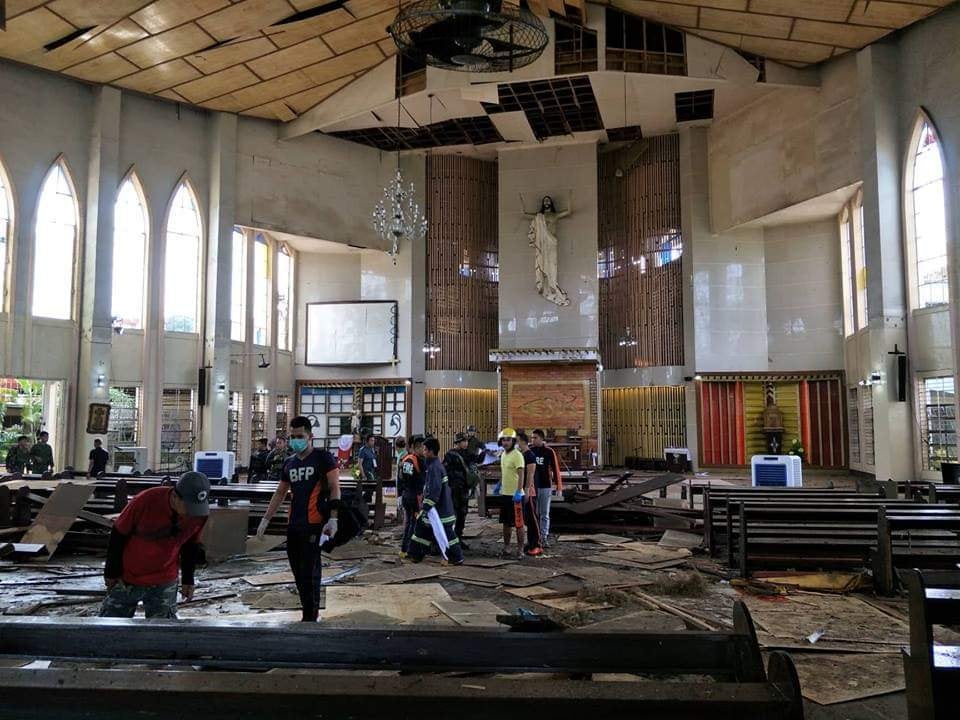 This photo shows the inside of Our Lady of Mount Carmel Cathedral in Jolo, Sulu following the deadly explosion on Sunday, January 27, 2019. Photos from United Kabalikat Civicom Jolo chapter, a citizen communications group.

MANILA, Philippines — The Philippines should collaborate with its neighbors in the region in order to counter a new wave of Islamist extremism in the war-torn southern part of the country, a terrorism expert said Thursday.

The deadly twin explosions at a cathedral in Jolo, Sulu on Sunday left 21 killed and at least a hundred wounded. The Armed Forces of the Philippines is looking at the Abu Sayyaf, a small group of militants known for its beheadings, kidnappings and bombings, as primary suspects.

The Islamic State (IS) has claimed responsibility for the attack, which it said was carried out by suicide bombers. Defense Secretary Delfin Lorenzana did not dismiss this possibility.

Local armed groups linked with the IS and a few dozen foreign fighters occupied Marawi City for five months in 2017 as they tried to establish a caliphate in Southeast Asia. It was the biggest security crisis of the Philippines in recent years.

He said Sunday’s bombing was indeed a suicide attack carried out by the IS.

“It is very likely that the attack was staged by foreign fighters working with IS Sulu faction led by Hatib Sawadjan. It is too early to determine the nationality of the bombers,” Gunaratna said.

If Gunaratna is right, this would make the second known case of suicide bombing in the Philippines. The first reported incident was in July 2018 in Lamitan, Basilan, which is believed to have been carried out by a Moroccan.

“The Philippines should take preventive and preemptive measures to contain, isolate and eliminate IS from taking root on Philippines soil,” Gunaratna said.

The Jolo attack happened days after majority of Muslim Mindanao overwhelmingly voted in support of greater autonomy through the creation of a new Bangsamoro region, but it was rejected in the island province of Sulu.

“The creation of a Bangsamoro entity will certainly reduce support for extremism and political violence. However, a tiny minority of Muslims influenced by the ideology of the Islamic State will continue to support and join the IS centric groups in the belief that they are fighting to create an Islamic State,” he added. /kga

Read Next
Chinese ambassador to donate P38M to Jolo bombing victims — Locsin
EDITORS' PICK
Omicron variant detected in more countries as scientists race to find answers
Gov’t plans to open COVID-19 vaccination for 5- to 11-yr-olds by January 2022
A delightful blessing!
Villar Group gears up for AllValue Shopping Party on Dec. 3; around P 1-million promos and discounts up for grabs
Legarda: Ending Violence Against Women, a cause for all
Gov’t eyeing COVID-19 vaccine booster for essential workers, indigents by Dec. 10
MOST READ
Quiboloy warns of ‘much worse than Omicron virus’ if his ‘persecution’ is not stopped
Marcoleta defends pol ads on ABS-CBN
MMDA: Number coding during afternoon rush hours back this week
PH updates ‘red list,’ travel ban imposed on 7 more countries
Don't miss out on the latest news and information.