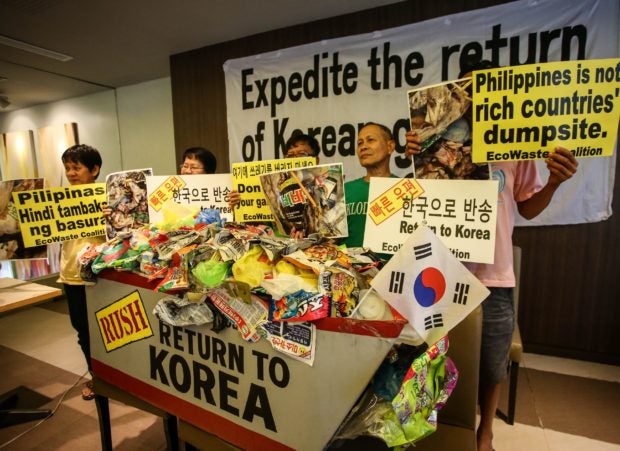 PH NO DUMP At a press conference in Quezon City on Wednesday, members of EcoWaste Coalition call for the swift return to South Korea of some 6,500 tons of garbage illegally transported to the Philippines in July last year. A customs official announced that the first of two shipments—which slipped through Tagoloan port in Misamis Oriental province—must be returned to their country of origin by Jan. 9. INQUIRER PHOTO / JAM STA ROSA

A Bureau of Customs (BOC) official said on Wednesday that he had told South Korean authorities to send 6,500 tons of garbage that were illegally shipped to the Philippines back to their country by next week.

John Simon, port collector of the BOC at Mindanao International Container Terminal (MICT), said he gave the Korean government until Jan. 9 to take back the first of two shipments of garbage that slipped through Tagoloan port in Misamis Oriental province last July.

“We want to send the message to the world that [the Philippines is] not a dumping ground, and we as a country have the power to send back garbage that was dumped from other countries,” he said at a press conference in Quezon City arranged by the environmental group EcoWaste Coalition.

The BOC is leading efforts to return the 51 containers of garbage that were misdeclared as recyclable plastics, which Simon described as “the biggest shipment of garbage that had arrived in the country.”

Documents showed that the shipment was imported from South Korea by Verde Soko Phils. Industrial Corp., and contained, aside from the declared plastics, about 32 tons of trash classified as “special or hazardous waste.”

The “special waste” found in the shipment included 2.63 tons of used batteries, 3.3 tons of discarded light bulbs, 25 tons of electrical and electronic waste, as well as 1.3 tons of dextrose tubes.

Simon and EcoWaste made the announcement days after a meeting was held between Philippine and Korean officials on the handling of the garbage shipment. 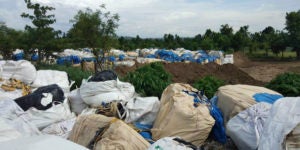 PH NO DUMP At a press conference in Quezon City on Wednesday, members of EcoWaste Coalition call for the swift return to South Korea of some 6,500 tons of garbage illegally transported to the Philippines in July last year. A customs official announced that the first of two shipments—which slipped through Tagoloan port in Misamis Oriental province—must be returned to their country of origin by Jan. 9. CONTRIBUTED PHOTO

According to Simon, the South Korean government agreed to take back the waste in keeping with its contractual obligation under the Basel Convention, an international treaty designed to reduce the movement of hazardous waste between nations.

“[The] South Korean government sent four representatives here to find out the costs of bringing back the shipment and to validate their earlier findings on the transport of the trash,” he said.

Based on BOC estimates, the reexport of the Korean trash would cost around $47,430, mainly for inland and ocean freight charges.

The Korean Embassy has said its Ministry of Environment conducted a “legal procedure” on Nov. 21 to have the garbage returned to Korea under its law on cross-border movement and disposal of wastes.

“The government stated that it would take measures to have the waste in question be brought back to Korea as soon as possible,” the South Korean Embassy said in a statement.

The embassy also said its government was investigating the Korean exporter of the trash.

“The government of the Republic of Korea—the Ministry of Environment, the Korea Customs Service and the Ministry of Foreign Affairs—has embarked on the investigation of a Korean exporter which caused a controversy in the Philippines this month,” it said.

The embassy said the Ministry of Environment and the Customs Service on Nov. 16 jointly inspected documents that covered the dumped garbage from its exporter based in Pyeongtaek City.

The agencies confirmed that the exporter delivered waste to the Philippines that did not go through “proper recycling process” and that its “documents for export were forged.”

The ministry also conducted an investigation after the exporter allegedly violated South Korea’s false export declaration law and barred it from shipping more waste, according to the embassy, which did not identify the exporter.

Simon admitted that the shipment slipped into the country “as gatekeepers (the BOC) had their eyes closed.”

The Interpol has reportedly started investigating the people behind importer Verde Soko, whose officials, Simon said, had made themselves scarce.

Initial findings showed that Verde Soko faked import documents from South Korea, the shipment did not pass through usual “thorough” inspection, and the company did not have any authority to transport.

“But it appears that despite these glaring discrepancies, they were given a red-carpet welcome. This is very disturbing,” Simon said.