Return of Balangiga Bells: ‘It’s time for healing and closure’ 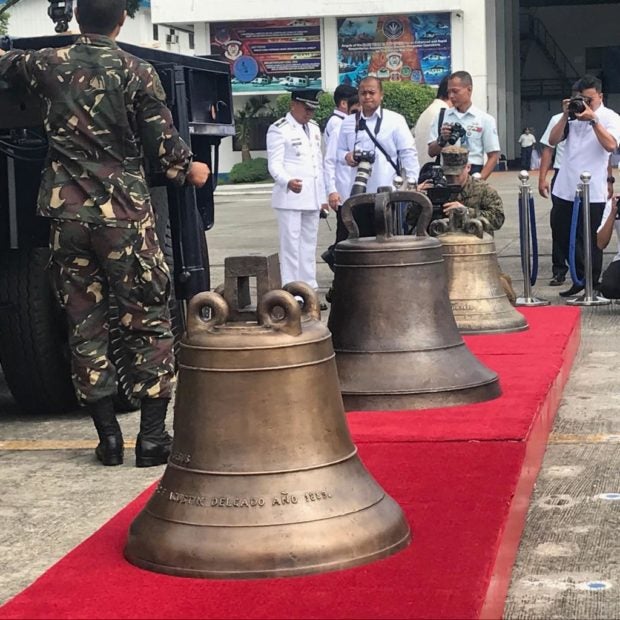 The bells were flown by a US C-130 cargo plane on Tuesday and will stay at the military air base until it returns back home to Balangiga in Samar on Saturday. Photo by Noy Morcoso / INQUIRER.net

MANILA, Philippines — The return of Balangiga Bells on Tuesday signals the closure of a dreadful chapter between the Philippines and United States after more than a hundred years.

“Now they are home. They are going back to where they belong. It’s time for healing, it’ time for closure. It’s time to look ahead as two nations should, with shared history and as allies,” Defense Secretary Delfin Lorenzana said in his speech during the handover ceremonies at Villamor Air Base.

The three historic bells were taken by American soldiers as war trophies in 1901, after they avenged an ambush that killed about 50 of their comrades.

The US forces razed the town which killed thousands of Filipinos, in what is known as Balangiga Massacre.

Two of the bells were previously installed at a memorial for fallen US troops at a military base Wyoming, while the third was in a US military base in South Korea.

The bells were flown by a US C-130 cargo plane on Tuesday and will stay at the military air base until it returns back home to Balangiga in Samar on Saturday.

“How could these three bells evoke so much intense emotion among Filipino and Americans? Maybe because we human beings live by symbols such as our national flag and in this instance, these bells. They are a symbol of our identity and ourselves,” Lorenzana said.

“This symbolizes the courage and patriotism of the soldiers whose acts we would like to perpetuate with these bells,” he said.

US ambassador Sung Kim said the return of the bells signals the “closing of a painful chapter” of the two countries which were once adversaries.

“That painful conflict soon ended, and our countries became partners and friends. We fought together for freedom and to protect democratic values across the Indo-Pacific region. In World War II and Korea, our soldiers fought, bled, died and sacrificed side by side,” he said.

“The bells’ return reflects the strong bonds and mutual respect between our nations and our peoples… The Bells of Balangiga are home now, in the Philippines, where they belong,” he added. /je