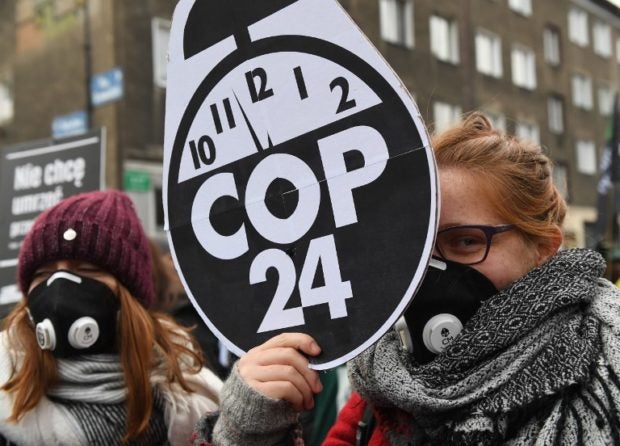 Protesters are pictured during a march for the climate on sidelines of the 24th Conference of the Parties to the United Nations Framework Convention on Climate Change (COP24) summit on December 8, 2018 in Katowice, Poland. AFP

KATOWICE, POLAND — Climate finance remained a major point of disagreement between rich and developing countries at the United Nations climate talks, as they race to finish the implementing rules of the Paris Agreement at the end of the first week of negotiations over the weekend.

In particular, loss and damage, which refers to irreversible losses due to climate-related events, had been met with resistance in finance, leaving developed countries with a bone to pick with vulnerable nations which suffer disproportionately under extreme weather events unleashed by climate change.

Draft negotiation texts released by the ad hoc working group on the Paris Agreement on Saturday revealed the lack of consensus on the mandatory biennial reporting of developed countries of the money it shells out to assist developing countries, as well as the subsequent accounting of these finances.

An analysis of these texts revealed that all mentions of loss and damage had been placed in brackets, meaning that there had been disagreements with its conclusion and that a consensus had not been reached in the technical working phase. These points of contention will ultimately be left for ministers and high-level officials to decide as the talks entered its second week, but not after a reported extension of two days, until Tuesday, to iron out more details on the draft texts.

“Bracketing the loss and damage text is an abandonment of the spirit of the Paris Agreement,” said the former Philippine negotiator. “It is also deeply worrying that developed countries continue to drag their feet on any finance conversations on loss and damage.”

“The level of apathy and arrogance of countries is deeply alarming,” he added.

Saño, as head of the Philippine delegation during the UN climate talks in Warsaw, Poland in 2013, was among the key negotiators who had pushed for the establishment of the Warsaw International Mechanism for Loss and Damage, which aims to address the impacts of climate change, particularly in vulnerable countries like the Philippines.

Harjeet Singh, who leads the global climate advocacy of ActionAid, said without incorporating loss and damage in climate finance, there would be no way to assess the funds flowing to developing countries who bear the brunt of extreme weather events.

“If we take ourselves to 2030, can we imagine a situation where impacts continue to rise and we have no system of assessing where we are in terms of loss and damage, our emerging needs and how money will be provided for people?” he said.

A special report by the UN-backed Intergovernmental Panel on Climate Change spelled out more severe impacts under a rapidly warming planet, including stronger storms, harsher droughts, and crop failures, if countries failed to undertake radical changes in slashing their carbon emissions.

This report, however, had also faced some resistance, after four major oil producers–United States, Saudi Arabia, Russia, and Kuwait–pushed back against the welcoming of its findings.

Climate justice expert Julie-Anne Richards said rich nations could not renege on their commitment on loss and damage, particularly as it was a stand-alone article in the Paris Agreement.

She noted, however, that there had been some softening on the stance on the issue of some developed countries, which could no longer turn a blind eye on these extreme impacts.