What is the state of democracy in Asia? | Global News
Close
menu
search

What is the state of democracy in Asia? 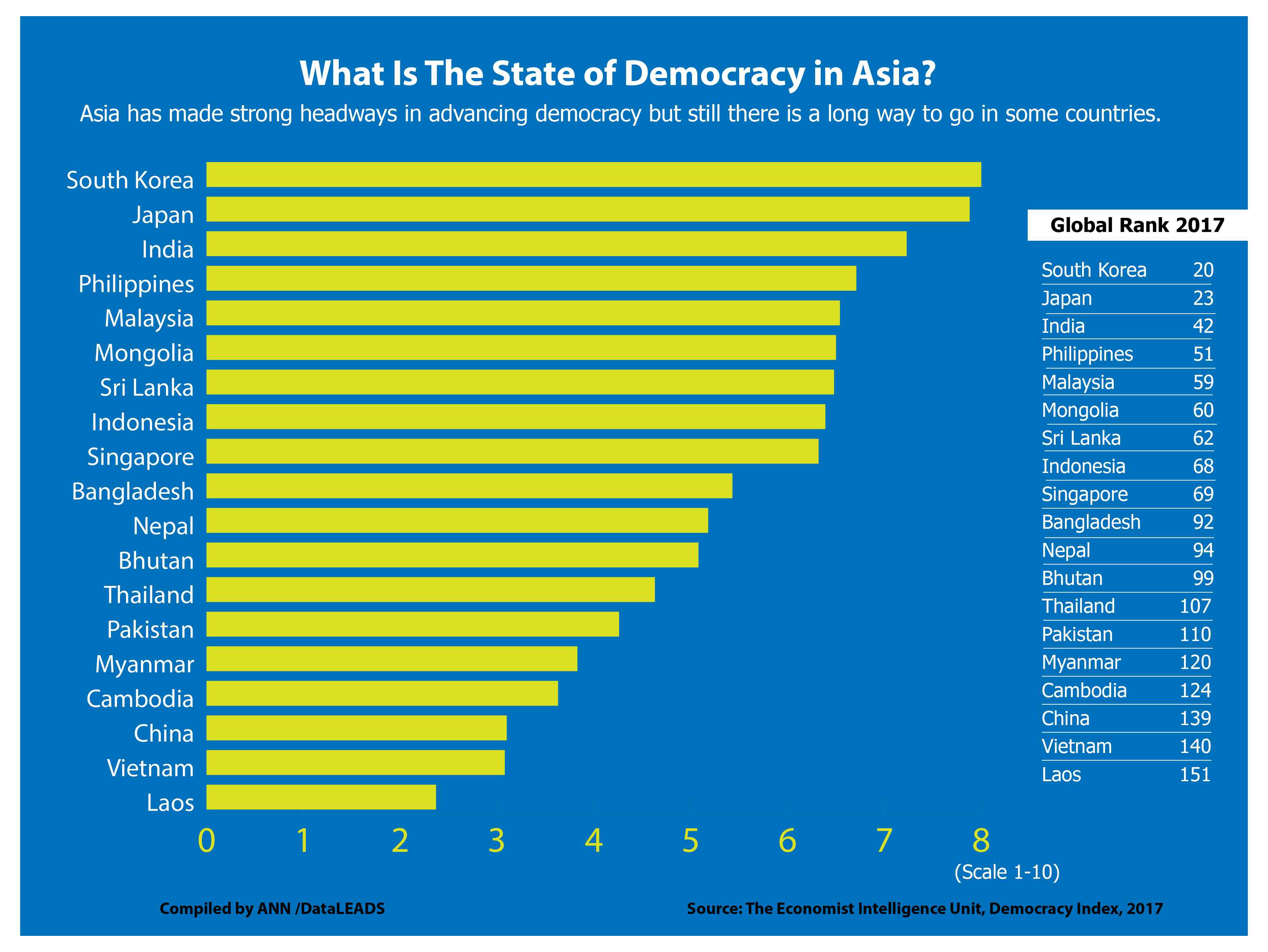 NEW DELHI — Asia has made strong headways in advancing democracy but still there is a long way to go in some countries.

The Economic Intelligence Unit’s report on Democracy Index is based on five categories: electoral process and pluralism; civil liberties; the functioning of government; political participation; and political culture. On the basis of these indicators it ranks countries on a scale of 10 and classifies them on the basis of their score as ‘full democracy’, ‘flawed democracy’, ‘hybrid regime’ and ‘authoritarian regime’.

While many Asian countries figure in the list of 166 countries, yet none of these countries according to the report has ‘full democracy’.  In Asia South Korea figures at the top. The country is ranked 20th, a jump from 24th position in 2016.  The improvement in score is attributed to a popular movement which led to the impeachment of the then president, Park Geun-hye, who was found guilty of embezzlement.

Japan is ranked second in Asia but 23 globally.  India is ranked third in Asia and 42 globally. The country saw a steep dip in its ranking from 32nd to 42nd place. The decline in the ranking is owed to the rising right wing force and attack on minorities and dissenting voices.

Philippines is ranked fourth in Asia and 51 globally. According to the report the declaration of martial law in the southern part of the country and Rodrigo Duterte’s continuous infringement of the democratic values has adversely affected the country’s democratic culture. Malaysia is ranked fifth in Asia and 59 globally followed by Mongolia and Sri Lanka globally ranked 60 and 62 respectively.

Indonesia has fallen from 48th position to 68th position mostly due to stringent blasphemy laws that have been used to curb the freedom of expression regularly.  It is followed by Singapore which is ranked 69 globall. Nepal and Bhutan are ranked 94 and 99 respectively. Thailand is ranked 107 globally .

Blasphemy laws in Pakistan and media censorship has created hindrances in the functioning of democracy. The country is ranked 110 followed by Myanmar and Cambodia.

Censorship of social media in China and the consolidation of power by Chinese leader has resulted in a stifling regime in the country. Journalists are continuously locked up and freedom of speech is not granted. According to the report the country is classified as authoritarian followed by Vietnam and Laos ranked 140 and 151 respectively.