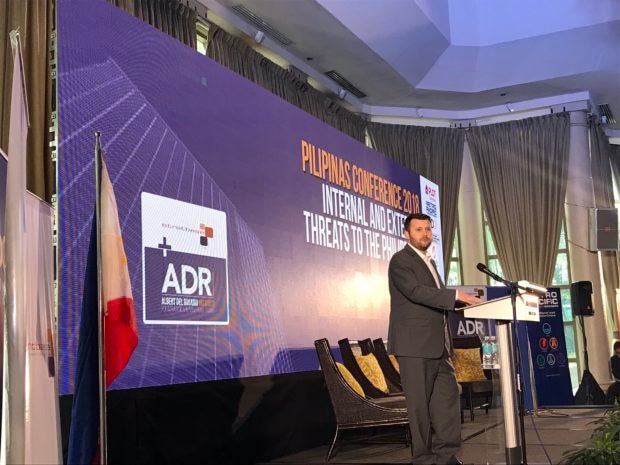 MANILA, Philippines — The United States should clarify how its Mutual Defense Treaty (MDT) with the Philippines applies to the situation in the West Philippine Sea (South China Sea).

For Gregory Poling, director of the Washington-based Asia Maritime Transparency Initiative, it’s a high time for the US to settle the questions surrounding the scope of the 66-year-old treaty.

The South China Sea expert said “one of the biggest strategic mistakes” of the Obama administration was the failure to sort out how the treaty comes into play when push comes to shove in the disputed waters.

“I would argue that one of the biggest strategic mistakes of the Obama administration was the failure to clarify the Mutual Defense Treaty and how it applies in the South China Sea. That remains a gross mistake the US needs to get done but it was only a political issue then,” Poling said at a security forum in Makati on Friday.

“Today, there’s a concern that if US did offer clarification, it would not be able to back it up. Right now, as of this year, the Chinese have three naval air bases in the Spratly Islands. They are 12 miles from Pagasa (Thitu) and 20 miles from Sierra Madre (Second Thomas Shoal). The closest US air assets are 1,300 miles away in Okinawa,” he added.

The Philippines, China, Taiwan, Vietnam, Malaysia and Brunei have overlapping claims in the South China Sea. But China claims most of the waters with their so-called nine-dash line, and has asserted its claims by building huge, artificial islands with military capabilities.

Defense Secretary Delfin Lorenzana told INQUIRER.net that a clarification from the US was important, “because it would specify how far they would back us up.”

At the Shangri-La Dialogue in Singapore in June, US Defense Secretary James Mattis dodged questions on the scope of the MDT.

“We stand by our treaty allies but this is a discussion between the current administrations in the Manila and in Washington DC and it’s not one that can be answered as simply as your question would indicate,” he said in the Q and A after his speech.

“To simply turn it into a military and non-military response is a shortchanging of the issue. Diplomacy is all about taking contrary perspectives and finding common ground and we’ve got to try to do that in this world,” he also said.

The Philippines and the US signed the MDT on Aug. 30, 1951, agreeing to come to each other’s defense against an armed attack.

As the US needs to clear the questions about MDT, Poling said the Philippines should also recognize the importance of the Enhanced Defense Cooperation Agreement. But four years after it was signed and two years after it was cleared by the Supreme Court, it has yet to be fully implemented.

“Here we stand in 2018: So far we have a warehouse and a command and control center built at Basa Air Base and another at Fort Magsaysay,” he said.

Under the EDCA, the US military would have access to five agreed locations in Philippine military bases. It also allows US forces to construct facilities and preposition assets in the said locations.

But the closest location to the South China Sea, the Antonio Air Base in Palawan, is still facing setbacks to start the construction of facilities, thus delaying the implementation.

Poling said the alliance would counter provocations in the disputed waters more effectively if the US would offer a clarification of the MDT and the Philippines would recognize that EDCA is necessary.

“The Philippines’ greatest leverage here remains the US alliance. It is what prevents China from using force. It is what makes Beijing think twice about the cost if it might have to pay if it does things like build in Scarborough Shoal.” /je