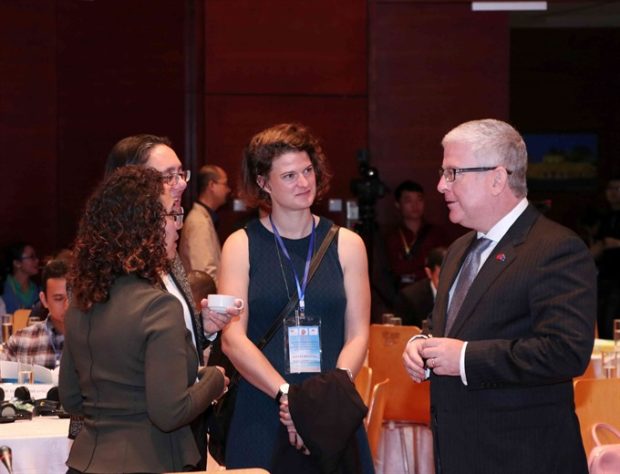 HANOI — Maritime law enforcement agencies should help uphold order, not become the tools of governments to “project power and change the order” in the East Sea, said Dr Pham Lan Dung, vice president of the Diplomatic Academy of Vietnam.

The ill-advised practice of unilateral moves has “resulted in a number of confrontations” in the region – one of the busiest sea lanes in the world – she said and called for deepened cooperation between the agencies of littoral countries.

Her remarks were made as the legal expert was addressing the ‘Fostering maritime security cooperation in the South China Sea’ workshop held yesterday in Hanoi, which in its third reiteration, drew the participation of several legal experts from the United Nations’ International Law Commission, as well as countries including the United Kingdom, Australia, France, Japan, Malaysia and the Philippines.

Vietnam’s maritime policy has always been to support regional peace and stability, well-maintained order based on the rule of international law, and resolve issues in accordance with the UN Charter, the 1982 United Nations Convention on the Law of the Seas (UNCLOS) and other sources of current international law, according to Dung.

The six law enforcement agencies (apart from the Navy), of Vietnam, aside from their jurisdictional duties, have co-operated with inter-agencies of many countries in the region and beyond, including China, the Philippines, Indonesia, Malaysia, Japan, South Korea and India, as well as a number of EU countries and the United States.

Australian ambassador to Vietnam, Craig Chittick, in his remarks, spoke of the currently complicated situation in the Indo-Pacific region and the world at large, fraught with “shifting dynamics and disruptions to international norms.”

His comment that the “international law space where nations big and small agree to play by the rules, and respect each other’s sovereignty can no longer be taken for granted” shares the same concern as Dr Lan Dung regarding the potential abuse of power by stronger countries.

The Australian diplomat also reiterated support for solving disputes in a peaceful manner and in line with international law, inclusive of economic development and open markets that facilitate freedom of navigation and overflight.

He conveyed an ideal vision for the Indo-Pacific region where “the United States remains strongly engaged in economic and security spheres and continues to help shape the region’s institutions and norms, where China plays a leading role in a way that strengthens the regional order” while the rights of smaller states are respected.

Craig also praised the central role of the Association of the Southeast Asian Nations (ASEAN) in upholding the rules and bringing about peace in the region for decades.

Steph Lysaght, deputy head of mission of the British Embassy in Vietnam, also shared his observation of “less commitment to multilateral action and partnerships” and more difficulties in “finding consensus and solutions” to pressing issues in the region.

He underlined Vietnam’s post-war reintegration into the international community and its “commitment to and growing influence on solving regional and global issues,” with maritime security cooperation being one clear manifestation of the country’s efforts.

Steph expressed his belief that the exchange of ideas and practices in the workshop and similar forums could “be seen as a wider vote of confidence to the rules based international system that has been the basis for the unparalleled prosperity that this region and the world has enjoyed over the last 20 years.”

The workshop’s panel discussions centred on three major topics: regional and international experience in maritime delimitation and dispute settlement, legal aspects in operations and co-operation between maritime legal enforcement agencies, and promotion of co-ordination between these agencies in the South China Sea.