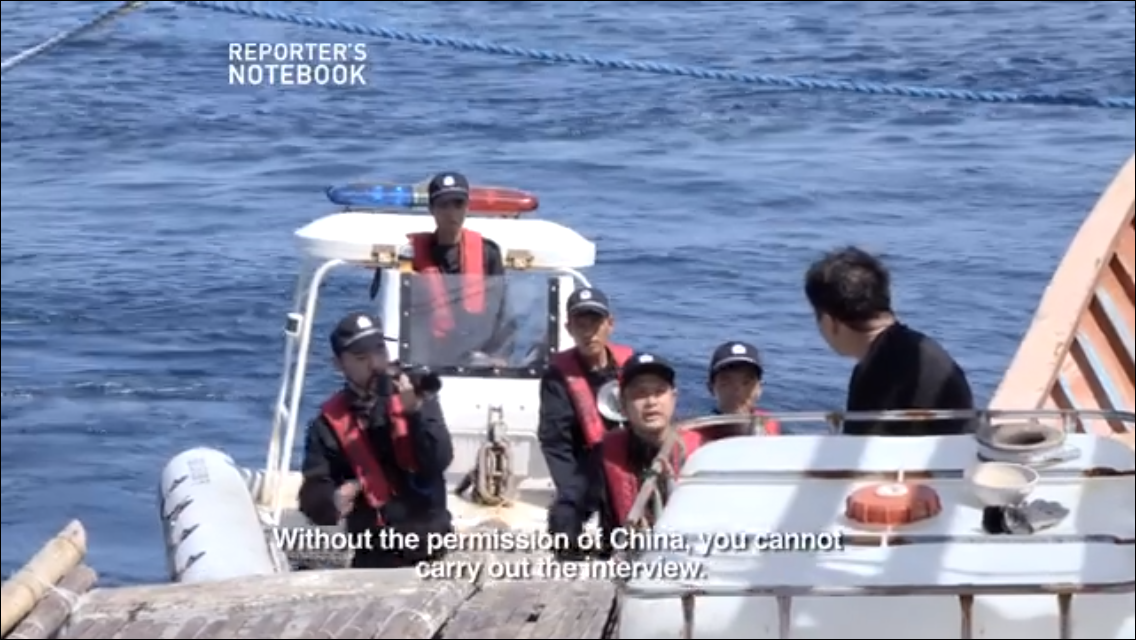 The incident, which was aired on GMA-7’s Reporter’s Notebook on Thursday night, was recorded last Nov. 8. It happened days before Chinese President Xi Jinping’s state visit to the Philippines early this week.

As the TV crew approached the shoal, two speed boats of the Chinese Coast Guard advanced towards the local fishing boat carrying the TV crew.

“Without the permission of China, you cannot carry out the interview here,” a smiling member of the Chinese Coast Guard told journalist Jun Veneracion.

While fishing activity was allowed, the Chinese officer said they were in the “sea area of the People’s Republic of China” and the Filipino crew needed permission from China to conduct interviews.

“But this is within the exclusive economic zone of the Philippines,” Veneracion answered.

However, the Chinese Coast Guard personnel did not allow them to stay any longer: “If you don’t leave here, we will make a forced matter.”

Veneracion, while not agreeing with the Chinese Coast Guard personnel, chose to leave the area to defuse the tension: “You need not warn us, sir.”

“The crew of China Guard Guard didn’t leave the area until we were miles away from Panatag Shoal,” he said.

The report follows another incident shown by the same program in June 2018 about the Chinese Coast Guard confiscating the catch of Filipino fishermen in Panatag.

The shoal, located 125 nautical miles from Masinloc, Zambales, was a site of tense standoff in 2012 between the Philippine Navy and the Chinese Coast Guard. This incident prompted the Philippines to take China to international court.

In July 2016, the Permanent Court of Arbitration in The Hague invalidated China’s sweeping claims in the South China Sea. It also ruled that Panatag Shoal is a common fishing ground for Filipino, Chinese and Vietnamese.

President Rodrigo Duterte, who came to power weeks after the hard-won ruling was issued, has refused to use the victory as leverage over China in exchange for economic investments. /muf