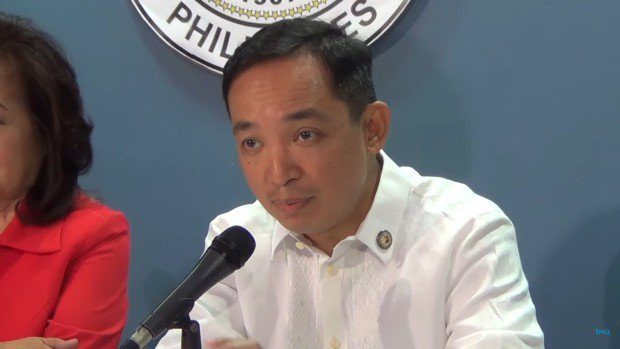 Opposition lawmakers have urged President Rodrigo Duterte to assert and uphold the Hague ruling on the West Philippine Sea (WPS) as Chinese President Xi Jinping arrived in the Philippines on Tuesday.

Joining protests in time for Xi’s arrival, ACT Teachers Reps. Antonio Tinio and France Castro called on the Duterte administration to assert and uphold the July 2016 ruling of the Permanent Court of Arbitration in The Hague which invalidated Beijing’s claim on almost the entire WPS.

The lawmakers also warned against economic agreements with China that may place the Philippines under further debt.

“We demand President Duterte to assert and uphold the favorable ruling of the international tribunal in The Hague which recognized the exclusive economic zone in the West Philippine Sea as President Xi Jinping of China arrives in the Philippines,” Tinio said in a statement.

“We oppose any economic agreement that threatens and weakens the legal victories already achieved by the Philippines with regards to the West Philippine Sea,” Castro said.

Bayan Muna Rep. Carlos Zarate meanwhile pointed out the Social Weather Stations survey which showed that 84 percent of Filipinos believe that it was not right for the government to let China expand its military presence in the WPS.

“The latest survey showed a 3% increase of those against the submissive handling of the Duterte l government vs China. We have long been suggesting ways for our country to assert our rights on the WPS but they fell on deaf ears,” Zarate said.

The opposition lawmaker also said they had filed numerous resolutions to probe China’s incursions in the territory, and that they filed a Supreme Court case in 2008 to declare the Joint Marine Seismic Undertaking (JMSU) — all to no avail.

But Zarate said this should not “deter” Filipinos in “asserting our rights.” /je