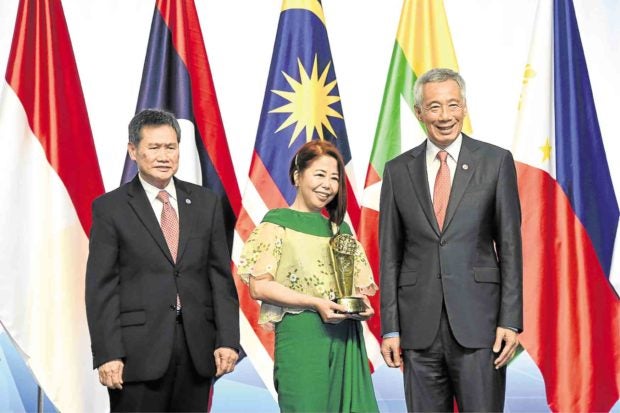 SINGAPORE — What began as a personal mission to do the best for her son who has autism led Erlinda Uy Koe to an advocacy that has inspired the Association of Southeast Asian Nations (Asean).

Koe, chair emeritus of the Autism Society Philippines (ASP) and former chair of the Asean Autism Network, received the award during the opening ceremony of the 33rd Asean Summit here.

Selected out of 49 nominees, Koe was feted for her family-centric approach in promoting awareness about the condition in the Philippines and beyond.

According to the World Health Organization, autism or autism spectrum disorders are complex brain development disorders characterized by difficulties in social interaction and communication and a restricted and repetitive set of interests and activities.

Autism is accompanied by a number of medical and health issues including gastrointestinal disorders, seizures, sleep disturbances, attention deficit disorder, anxiety and phobias. People with autism often suffer from stigma and discrimination.

“It’s a statement that the Asean now embraces inclusion for people with autism like our children, and people with other special needs. Winning it in itself is a statement. So we look forward to a more autism-friendly Asean and of course, it starts with us,” she said.

In a statement, the Asean said Koe’s engagements “have sparked discussions on project collaborations with China and Korea.”

President Rodrigo Duterte also applauded Koe, a widow and mother to three boys. “The Philippines is honored by the conferment of the premier award to Koe, whose work with ASP and the Asean Autism Network has touched the lives of persons with autism and their families across the region,” the President said during a working dinner with Asean leaders.

Koe’s advocacy comes from a deeply personal place: her firstborn son, 24-year-old Gio, was diagnosed with autism when he was 3 years old.

She recalled that at the time, she mainly focused on equipping herself with enough information and finding a support group to help her raise Gio.

It was then that she joined ASP, which by then was already one of the most dynamic Philippine organizations looking after persons with disabilities or special needs.

In 2016, Koe became chair of the Asean Autism Network, a platform that enables member-states to cooperate and unite in developing nondiscriminatory programs to support persons living with autism and their families.

In line with Asian and Pacific Decade of Persons with Disabilities (2013-2022), Koe served under the working group of the United Nations Economic and Social Commission for Asia and the Pacific.

Her efforts with ASP encouraged volunteer groups to embark on public education campaigns aimed at raising awareness about autism.

One such program involves teaching frontline mall staff how to spot and react to children with autism. Parents are also taught how to raise such children.

The group’s social media campaign, “One Pangako,” has evolved into “Isang Bansa, Isang Pangako,” in which people and organizations pledge not to use the term “autistic” as a means to ridicule others, Koe said.

Every year since 2007, ASP has hosted the Angels’ Annual Walk for Autism, a public awareness activity that, Koe said, has inspired others to do the same.

ASP also partners with some companies to hire people with autism, she added.

“I see the parents in track and field events, pushing their child to reach the goal. And the whole community would rally until the last child reaches it,” Koe recalled of the games, her voice cracking.

She added: “For us, we don’t need an Olympics. But [it is a means] to show that we can overcome everything as long as we work together, and as long as we give [these children] a chance to learn in the way that they can handle.”

Koe admitted that her advocacy had led to some offers for her to run as a party-list representative for people with autism, but she refused.

For now, she plans to use her $20,000 prize for projects and programs that benefit people with autism.

“I hope this award will open more doors for us to approach policymakers in [the] government and in private companies,” she said.

Looking back at her 21 years of working with ASP and raising her son, who remains fully dependent on her, Koe now sees his disability as a blessing for their family.

“I was given a child with autism. It is such a big blessing because through this, our greater purpose as parents and as a family was given clarity,” she said.

She advised parents of children with autism to steel themselves and move on to seek out what’s best in raising their child.

“If you find out that you have a child with autism, you will cry and mourn. But after that, you have to move on,” she said.

More than ever, Koe is grateful that more people are beginning to exhibit the three As in dealing with people with autism: acceptance, accommodation and appreciation.

She added: “My son will never be independent. But I am thankful that because of him and others like him, our society has become more and more compassionate.”