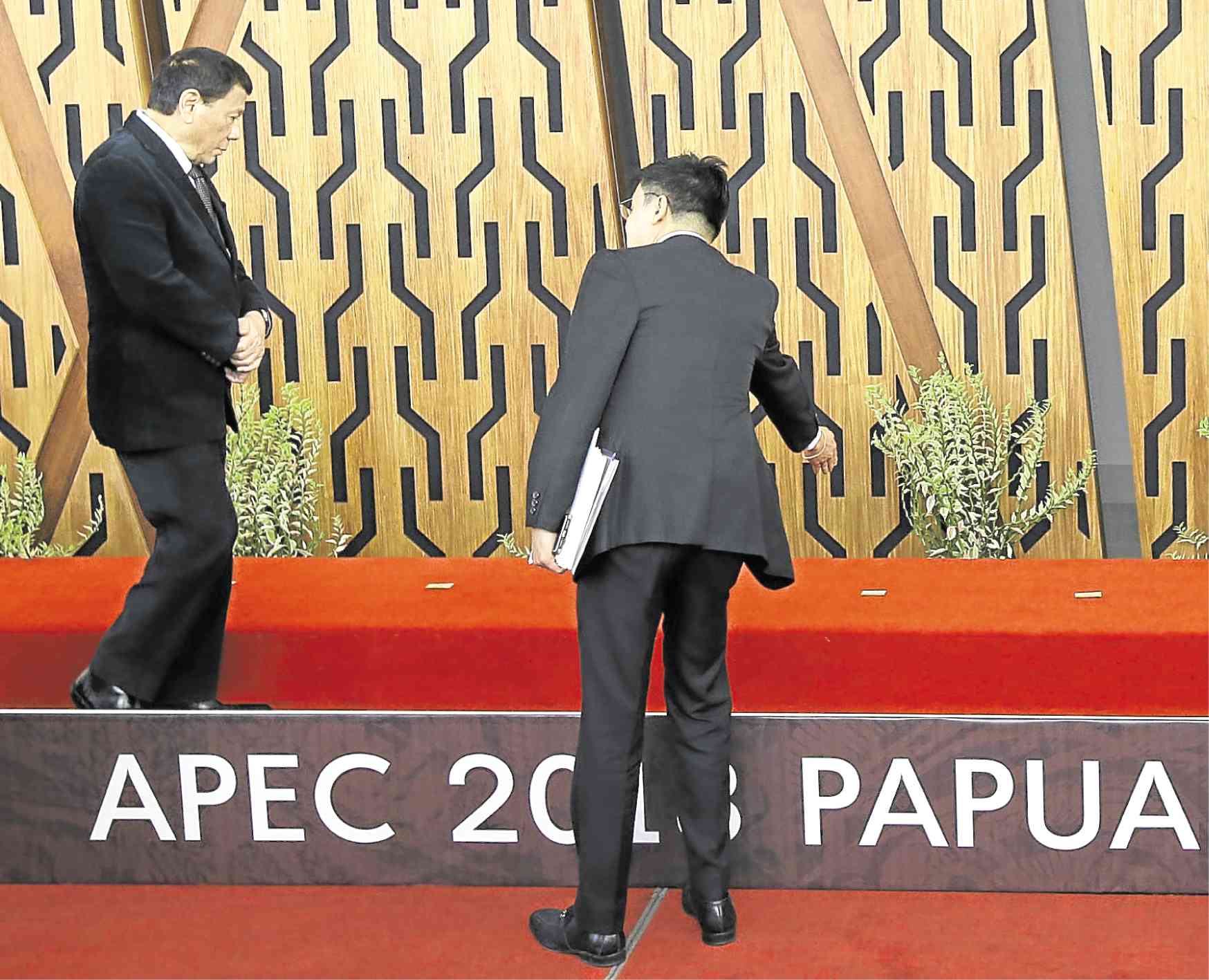 IN THE FRAME President Duterte (left) is ushered in for a family photo, along with 21 other world leaders, at the 2018 Apec Leaders’ Meeting in Port Moresby. Mr. Duterte cut short his participation in the regional summit and was scheduled to leave the Papua New Guinea capital at 11:30 p.m. on Saturday. —AP

The President’s early return home means he would miss some of the most important events at the Apec meeting, including a working lunch with 20 other world leaders and an informal dialogue with International Monetary Fund officials.

Malacañang announced on Friday evening that the President would also not give a statement upon arrival in Davao City, something he usually does after foreign trips to enumerate what he had achieved.

On Saturday morning, presidential spokesperson Salvador Panelo issued a statement — an explanation to reporters covering the presidential trip in Port Moresby of the reason for the President’s shortened trip — only to withdraw it after 30 minutes.

“The President will personally convey this imperative decision to his good friend, Papua New Guinea Prime Minister Peter O’Neill, who we hope will understand the same,” Panelo said in the aborted statement.

The President’s health has been a constant source of speculation. Last month he disclosed that he had undergone tests for colon cancer and that the tests came back negative.

But Sen. Antonio Trillanes IV said the President had no reason to come home early from the Apec meeting as there was no urgent situation in the country.

“There is no tragedy, there are no emergencies. He’s just being lazy, or he’s really sick,” Trillanes said in a radio interview.

He said martial law extension was not a valid excuse because the President could have discussed this with security officials upon his arrival.

“Have them come to the airport when you arrive. You should not pull out of an international commitment,” Trillanes said.

It should be clear to the people now that the President is lazy, the opposition senator added.

Trillanes again scoffed at the reason for the President having to take what Malacañang said were “power naps” and miss out on important meetings at the Asean Summit in Singapore.

Panelo earlier played down the President’s absence from the meetings and pointed out the nonappearance of US President Donald Trump, who was represented in Singapore and Port Moresby by Vice President Mike Pence.

“Accusation that the President is lazy or [too] seriously ill to perform his functions as head of state and government just because he had to take power naps in between a few events … and avoid the embarrassment of dozing off during one of the meetings is a product of a witless if not malicious mind,” Panelo said on Friday.

Health Secretary Francisco Duque III also defended the President’s power naps, which he described as an “important” activity for someone his age so he could better discharge his functions and responsibilities to the nation.

Duque pointed out that as a person ages, his or her sleep cycle shortens.

In the case of the 73-year-old President, he said, power naps are “natural” to allow him to recharge, especially given his hectic schedule.

“That is really needed by the body, especially if you’re tired. The job of the President is not a joke. That is the hardest job in the world. Let us not deprive him of his much-needed rest, even for just a short period of time, since that is what his body needs,” Duque said.

But Trillanes said the President could have arrived early in Singapore to get enough time to rest for the morning meetings that he eventually skipped.

The Asean events are for heads of state and the President is expected to do his duty, he said, adding that older leaders, like the 93-year-old Malaysian Prime Minister Mahathir Mohamad, were able to meet their schedule.

“He’s not maximizing his opportunity to speak to other leaders regarding the problems [of] our country,” Castro told reporters.

Magdalo Rep. Gary Alejano said the President showed his lack of interest “in engaging with our Asean neighbors in [their] pursuit of a more integrated region.”

Panelo’s statement said the President had designated Trade and Industry Secretary Ramon Lopez as his special representative for the remainder of the Apec meetings.

Senate President Vicente Sotto III surmised on Saturday that the President cut short his participation in the Apec meetings to prepare for the possible extension of martial law in Mindanao.

“Maybe [security officials] would present the plan to him before he endorses it to Congress. Maybe he knows we are pressed for time because of the budget, and we are trying to amend the Human Security Act,” Sotto said in a radio interview over dwIZ.

Military officials earlier said they planned to recommend another extension of martial law in Mindanao, which has been in place for more than a year after Islamic State-allied militants seized Marawi City.

The President is expected to arrive in Davao City at 3 a.m. on Sunday. —With reports from Christine O. Avendaño, Jovic Yee and Jerome Aning