US calls on China to remove missiles from Spratly Islands 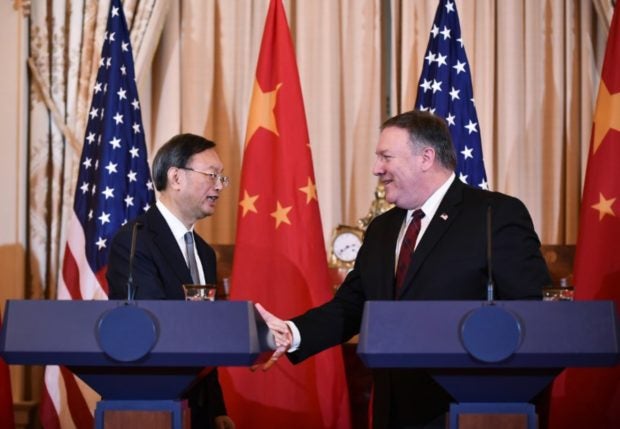 US Secretary of State Mike Pompeo and Chinese politburo member Yang Jiechi shake hands following a press conference with during the US-China Diplomatic and Security Dialogue in the Benjamin Franklin Room of the State Department in Washington, DC, on November 9, 2018.  AFP

The United States has called on China to remove its missiles from three heavily fortified outposts it has built in the disputed Spratly archipelago in the South China Sea.

The US call came after high-level US-China diplomatic and security dialogue in Washington on Saturday.

“The United States called on China to withdraw its missile systems from disputed features in the Spratly Islands, and reaffirmed that all countries should avoid addressing disputes through coercion or intimidation,” the US Department of State said in a statement.

It was the first time that the United States directly mentioned the missiles since China was reported in May to have deployed weapons systems to three of seven artificial islands it had built in the Spratlys.

The United States also implied that it believed the weapons were still on the artificial islands.

China responded by telling the United States to stop sending ships and military aircraft to the South China Sea, its first direct statement about US freedom of navigation and overflight operations in the strategic waterway since September, when a Chinese destroyer came aggressively near the USS Decatur, causing the postponement of the US-China diplomatic and security dialogue in Beijing last month.

But the United States pushed back, telling China it would continue to “fly, sail and operate wherever international law allows.”

Even so, both the United States and China committed to supporting peace and stability in the South China Sea, the peaceful resolution of disputes, and freedom of navigation and overflight and other lawful uses of the sea in accordance with international law during the dialogue, the state department said.

The United States takes no sides in the territorial disputes in the South China Sea, but has expressed interest in the peaceful settlement of the rival claims.

China claims nearly all of the 3.5-million-square-kilometer South China Sea, including waters within the exclusive economic zones (EEZ) of Brunei, Malaysia, the Philippines and Vietnam.

Taiwan is another claimant to territory in the South China Sea.

In July 2016, the UN-backed Permanent Court of Arbitration in The Hague, ruling in a challenge brought by the Philippines, invalidated China’s sweeping claim and declared it had violated the Philippines’ sovereign right to fish and explore for resources in the West Philippine Sea, waters within the country’s 370-kilometer EEZ in the South China Sea.

China has topped the biggest islands with ports that can receive large ships and airstrips with runways that can handle big military planes.

President Rodrigo Duterte, who came to office two weeks before the ruling came down, set aside the arbitral court award in exchange for aid, loans and investment from China.

In May, US television network CNBC reported that China deployed antiship and surface-to-air missiles on Kagitingan, Zamora and Panganiban reefs.

Philippine lawmakers urged the Duterte administration to protest the deployment, but the Department of Foreign Affairs (DFA) and the military only said they were verifying the report.

Nothing has been heard about the weapons since, until the United States mentioned them directly to China on Saturday.

“This is the first time the US has indicated it believes the YJ-12s and HQ-9s China deployed to Spratlys in May are still there, not just a temporary deployment for exercises,” Gregory Poling, director of Asia Maritime Transparency Initiative (Amti), said on Twitter.

“Amti and others have been unable to confirm that since China presumably kept them in shelters,” Poling said.

The deployment meant that China had deployed weapons on the Philippines’ EEZ, Alexander Neill, Shangri-la Dialogue senior fellow for Asia-Pacific security at the International Institute for Strategic Studies, told the Inquirer in May.

“In practice, China now has the capability to deny the Philippines access in the air or at sea to the islands and reefs it claims,” he said.

Last week, China announced that it had opened weather observation stations on Kagitingan, Zamora and Panganiban reefs, alarming lawmakers and maritime experts who said the installations could be used for military purposes.

The DFA said it would verify the reports about the announcement, and would take appropriate action if the reports proved true. —With a report from AP

What China’s reported missiles in Spratlys mean for PH