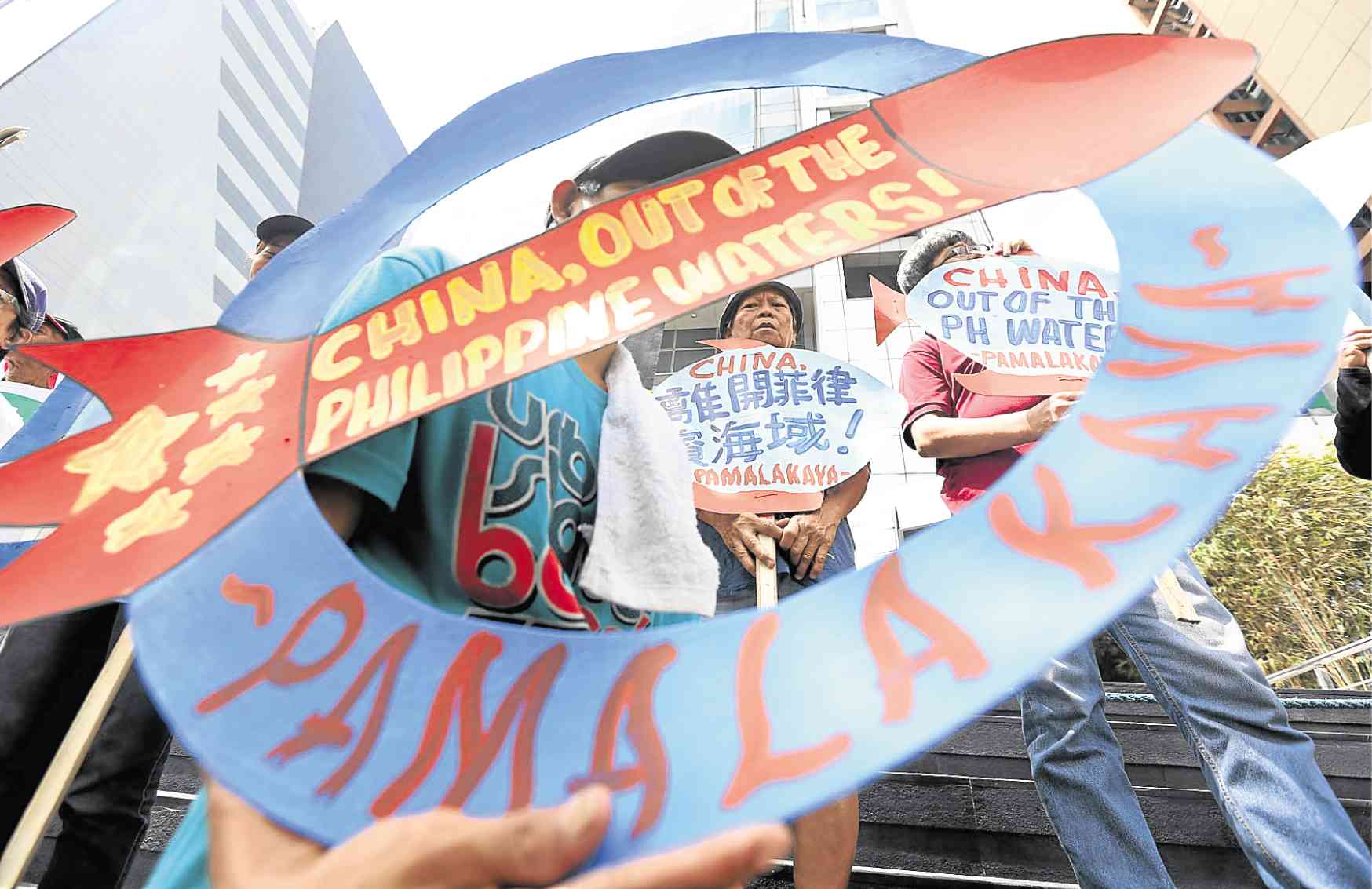 AFFECTED SECTOR Fishermen’s group Pamalakaya holds a rally in May in front of the Chinese Consulate in Makati City to protest Chinese incursions into Philippine fishing grounds.

Territorial disputes in the South China Sea were expected to be discussed during the 33rd Association of Southeast Asian Nations (Asean) Summit and related summits in Singapore next week, which President Duterte would attend.

One of the major issues likely to be tackled is the maritime dispute involving China and some members of the regional bloc, according to Foreign Affairs Assistant Secretary Junever Mahilum-West.

“We are quite sure that the South China Sea, as I’ve mentioned before, would be one of those regional developments that would be taken up in the summit,” she said.

“As to the details of the discussions, I cannot say but for sure there’s going to be discussion on the South China Sea,” she said.

Another regional issue up for discussion are developments in the Korean Peninsula.

West said President Duterte might have a chance to talk with Chinese President Xi Jinping on the sidelines of the Asean summit, given the small size of the venue.

Xi was expected to visit the Philippines shortly after the Asean summit.

The President will leave for Singapore on Monday to take part in the three-day Asean summit.

West said the venue of the summit was a “very small place so there’s always the possibility” of Mr. Duterte meeting with Xi.

“But any meetings would have to be prepared beforehand,” she said. “So we’ll just see,” she added.

Mr. Duterte had expressed admiration for Trump and Putin, referring to Trump as his friend and Putin, his idol.

The President was expected to tackle several key issues concerning the country and the region as a whole, according to West.

West said these were issues very important to the Philippines like micro, small and medium enterprises.

“We would also be very interested in women and youth development, disaster management, climate change and people-to-people exchanges,” she said.

Transnational and other issues like terrorism, violent extremism, trafficking in persons, illicit drugs, climate change and disaster management may also be tackled.

Read Next
Vietnam protests China’s weather stations in disputed Spratlys
EDITORS' PICK
Get 80% OFF Ignite 2020 Cyber Tickets starting 28 September
Despite toll, never too late to fight pandemic—WHO chief
Feud is over: Velasco next Speaker on Oct. 14
Smart poised to turn PH into ‘Smart 5G country’ with nationwide rollout
House to probe Facebook takedown of gov’t accounts
Water remains our saving grace right now
MOST READ
Velasco to take over as Speaker on Oct. 14
2 PDP-Laban allies in House jump over to Lakas-CMD
Gun attack in PMA: Air Force man killed, 2 others wounded
Duterte meets with Cayetano, Velasco amid speakership issue
Don't miss out on the latest news and information.