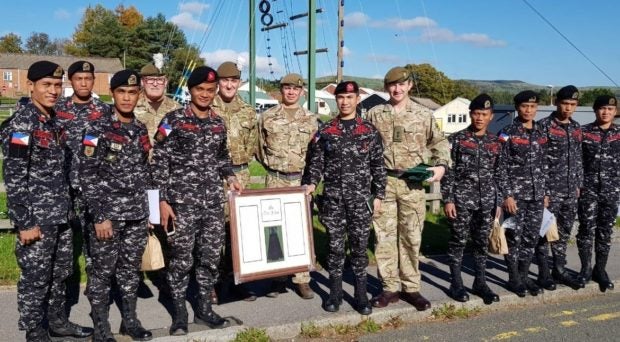 Members of the Army Scout Rangers (in dark camouflage) pose with their hosts in the United Kingdom after conquering the formidable Exercise Cambrian Patrol and ranking fourth in the rigorous military competition. PHILIPPINE ARMY PHOTO

The EX CP, an annual event which started in 1959, is a long-range patrol exercise open to international participants and is considered as one of the most arduous military events designed to test leadership, field craft, discipline, and both mental and physical strength, said Army spokesperson Lt. Col. Louie Villanueva in a statement.

This year’s patrolling exercise was hosted by the British Army in Wales, the United Kingdom, from Oct. 8 to 20. A total of 28 countries from various international armies joined this year’s event.

The eight-man patrol team led by First Lieutenant Billy Codiam was recognized on Monday during the flag-raising ceremony in Army headquarters, Taguig City.

“The Philippine Army in its pursuit of becoming world-class always takes the chance to participate in various military exercises or competitions not only to acquire and develop new skills but as well as foster good relations and camaraderie with other armed forces,” Villanueva said. /cbb