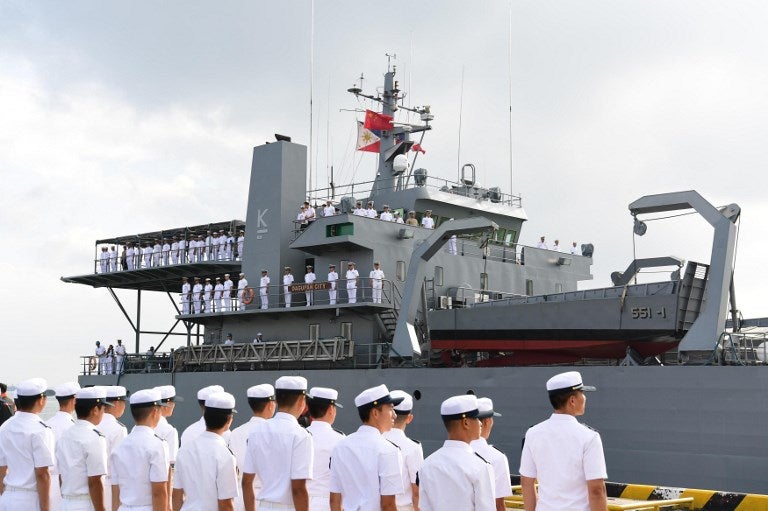 This photo taken on October 21, 2018 shows the Philippines navy ship Dagupan City arriving at a military port in Zhanjiang, in China’s southern Guangdong province. – China and Southeast Asian states will hold their first joint maritime exercises this week, officials said on October 19, in a move aimed at easing tensions but which may spark US alarm. AFP PHOTO

BEIJING — Naval forces from China and members of the Association of Southeast Asian Nations wrapped up their first joint maritime exercise over the weekend, with representatives of the participating countries expressing their hope for more such drills in the future.

Eight ships, three helicopters, five observers and more than 1,200 naval personnel from China and all 10 Asean countries participated in the on-shore activities and exchanges and drills at sea in Asean-China Maritime Exercise-2018 from October 22 through Sunday.

The eight-ship fleet conducted various drills in waters east of Zhanjiang, Guangdong province, including search and rescue operations and medical evacuation drills with helicopters landing on other ships.

The Code for Unplanned Encounters at Sea was used throughout the entire exercise, with the vessels efficiently communicating, coordinating and acting within its framework, enhancing all parties’ understanding and application of the rules, said Peng Guliang, Chinese co-commander of the exercise’s combined task group command at sea.

That command consisted of officers from various countries and was jointly led by co-commanders from China and Singapore. It fully embodied the expanded mutual trust among Chinese and Asean navies, Peng said.

Rotation of ships leading the drills is a common practice in a multilateral exercise, said Aaron Li Jun Hong, commanding officer of Singaporean frigate Stalwart, adding “this is an opportunity when participating navies take charge of different drills, and we can learn from each other.”

“The exercise has fully shown the new level of strategic cooperation between China and Asean,” Wang Hai, naval commander of the Southern Theater Command of the People’s Liberation Army, said at the closing ceremony on Saturday.

“The cooperation in defense and security has made new progress, and together we have written a new chapter in pragmatic naval exchange among countries surrounding the South China Sea,” he said.

“The exercise has promoted our mutual understanding, deepened our strong friendship and enhanced our mutual political trust,” Wang said. “I firmly believe that this exercise will be a new beginning for China and Asean to deal with security threats together and maintain regional peace and stability.”

Lim Yu Chuan, co-director of the exercise, commander of the First Flotilla and commanding officer of 185 Squadron of the Republic of Singapore Navy, said, “The successful conduct of the inaugural Asean-China Maritime Exercise is an important achievement for the navies of Asean and China.”

“The drills have enabled us to strengthen interoperability and, more importantly, to build trust and confidence in our navies working with one another in responding to maritime incidents.

“Together with my counterpart co-director from the PLA Navy, we are very heartened by the professionalism and hard work put in by the participants in ensuring the success of this exercise,” Lim said.

The exercise exhibited the will and determination of both China and Asean to safeguard peace and stability in the South China Sea through cooperation, and it will help better attain the goal, said Zhang Junshe, a senior researcher at the PLA Navy Military Studies Research Institute.