US commits P1.35B for Marawi rehab 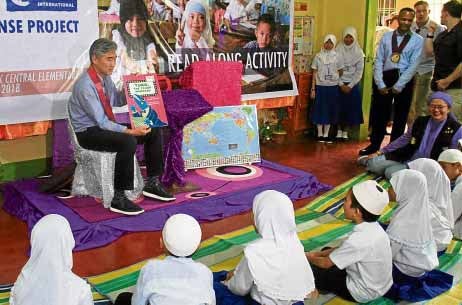 The United States has pledged P1.35 billion more in aid to help rebuild Marawi City, which remains in ruins a year after government forces, backed by nine countries that provided intelligence and military equipment, liberated it from terrorists linked to the Islamic State (IS) jihadi group in Iraq and Syria.

US Ambassador to Philippines Sung Kim announced the additional three-year development package under the US Agency for International Development (USAID) Marawi Response Project worth $25 million during his visit to the Islamic city on Tuesday.

The latest package brings the total USAID funding commitment to the rehabilitation of Marawi City to almost P3.2 billion ($59.1 million).

Once a beautiful Islamic city by a lake in Lanao del Sur province, Marawi was reduced to rubble in the fighting between government forces and hundreds of Maute and Abu Sayyaf terrorists and some foreign fighters who seized the city on May 23, 2017, to establish an IS province in Southeast Asia.

Backed by the United States, Australia, Brunei, China, Indonesia, Israel, Malaysia, Russia and Singapore—which provided intelligence, technical assistance and military equipment—government forces battled the terrorists for five months, killing 974 of them, including their leaders, and capturing 12.

The government lost 168 soldiers and policemen in the battle for Marawi.

Eighty-seven civilians died and hundreds of thousands of residents of Marawi and surrounding areas were displaced.

President Duterte declared Marawi liberated on Oct. 17, 2017, but military operations to flush out the remnants of the terrorist force continued until Oct. 23, 2017.

On Wednesday, the people of Marawi marked the first year of their city’s liberation from the terrorists not in the city square with singing and dancing but in the shelters, pleading to the government to allow them to return home.

“We want to go home, whether they pay us, we don’t need it,” Jalilah Hadji Sapiin, a community development officer in the Autonomous Region in Muslim Mindanao and member of the Bangsamoro Youth Leaders Program-Leadership Communities, said, referring to the reparation promised by the national government to Marawi residents displaced by the conflict.

Among the displaced living in the shelters in Lanao del Sur and Lanao del Norte province are 75 Christian families.

They receive aid from “Duyong Marawi,” a program launched by the Prelature of St. Mary’s Marawi that provide food and shelter for both Muslim and Christian evacuees.

Malacañang on Wednesday pleaded for more time to launch a reconstruction and recovery program, with presidential spokesperson Salvador Panelo saying groundbreaking was expected to be held soon.

The additional US aid will go toward recovery.

The US ambassador said the new package under the Marawi Response Project would help build the foundation for the longer-term recovery of the displaced communities.

“As the situation evolves, so does the nature of our response to the crisis,” Kim said.

The US Embassy said the new development package would expand livelihood activities and help restart local businesses in and around Marawi through microgrants and programs to link the youth to Mindanao’s thriving services sector and supply chains.

“The US government shares the concern of the Philippine government for ongoing economic, social, health and education needs of the people of Marawi and neighboring municipalities,” Kim said in a news conference at Amai Pakpak Elementary School on Tuesday.

At Camp Ranao, Kim laid a wreath at a memorial for soldiers killed in action during the battle for Marawi.