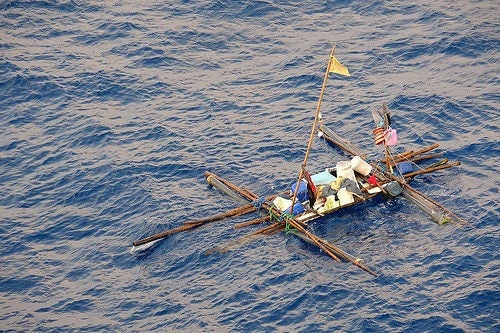 A photo released by the US Pacific Fleet shows the makeshift raft used by five Filipino fishermen to survive after their boat sank in the South China Sea. PHOTO COURTESY OF US PACIFIC FLEET

Five Filipino fishermen adrift in the South China Sea have been rescued by the crew of a US cargo ship, the US Pacific Fleet said Tuesday.

The USNS Wally Schirra (T-AKE 8) was on a routine mission when it spotted the distressed fishermen last Monday.

“Luckily, we were going at a slow enough speed to have spotted the fishermen,” said civilian mariner Capt. Keith Sauls, the Schirra’s master.

“The individuals were waving their arms and a flag in the air. They were also flashing a white light that was previously thought to be a fishing buoy. The watch officer notified me, then the chief mate of a possible rescue situation,” Sauls said.

The US ship deployed a rigid-hulled inflatable boat and the fishermen swam towards it when it came closer.

According to the fishermen, their boat sank last Oct. 3 after the hull was punctured by the bill of a blue marlin, estimated at 6-feet long and about 200 lbs.

All the five fishermen had been adrift for five days before rescued.

The fishermen were given an initial medical assessment and subjected to security procedures.

They were later handed over to the Philippine Coast Guard after the US Navy received clearance to go to Subic Bay. /cbb