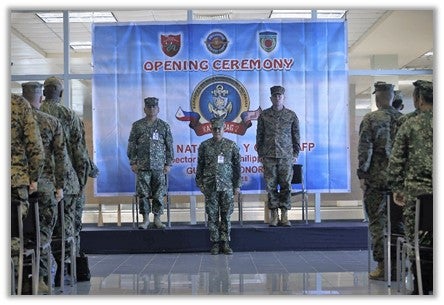 SUBIC BAY FREEPORT — A joint military exercise being conducted by the United States, Japan, and the Philippines kicked off on Monday at the Subic Bay International Airport.

About 1,000 naval and marine troops from the three countries are set to participate in the military drill dubbed “Kaagapay ng mga Mandirigma ng Dagat” (KAMANDAG).

Capt. Jerber Anthony Belonio, director of the Marine Corps Public Affairs Office of the Philippine Marines, said KAMANDAG 2018 will be held from October 1 to 10 in various locations in Luzon.

Last week, amphibious landing crafts of the Japan Maritime Self Defense Force started arriving in this former US naval base for repair.

KAMANDAG is an acronym for the Filipino phrase “Kaagapay Ng Mga Mandirigma Ng Dagat,” or “Cooperation of Warriors of the Sea.”

The name emphasizes the close partnership between the Philippine and United States militaries, said an advisory from the US Embassy in Manila.

KAMANDAG aims to increase the overall U.S. and Philippine military readiness, improve bilateral responsiveness, and strengthen the working relationships between the participating countries.

This is the second naval training of this scale to be held in the country. /je