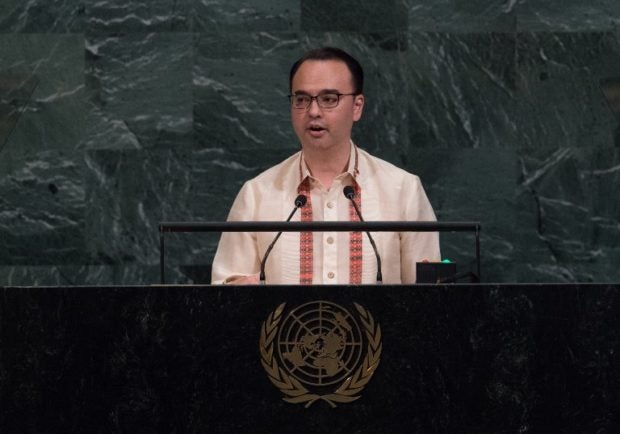 Foreign Affairs Secretary Alan Peter Cayetano defended the Duterte administration’s drug war at the United Nations General Assembly in New York on Saturday, saying that it has “not only prevented the Philippines from becoming a “narco-state,” it has also helped protect the rights of every Filipino.”

“As a sovereign and democratic country led by a duly-elected President, we are on track in salvaging our deteriorating country from becoming a narco-state,” Cayetano said during his speech at the 73rd Session of the UN General Assembly.

President Rodrigo Duterte’s controversial campaign against illegal drugs has resulted in the deaths of thousands of Filipinos and has received international condemnation.

He noted that the rights of “law-abiding citizens and law enforcers” are protected over the rights of “drug lords and criminals who seek to kill and destroy.”

In his speech, Cayetano mentioned that the Philippines “shares the uncompromising stance of the UN” on issues related to the “rule of law, just and equitable peace” that he said will lead to “order, development and prosperity” as well as the “protection of the rights of each and every human being.”

“We may sometimes differ in how we express ourselves, yet this should not be interpreted as turning our backs on the universal declaration on human rights,” he said. /ee