UN campaign vs violence against children, adolescents with disabilities launched in Asia-Pacific 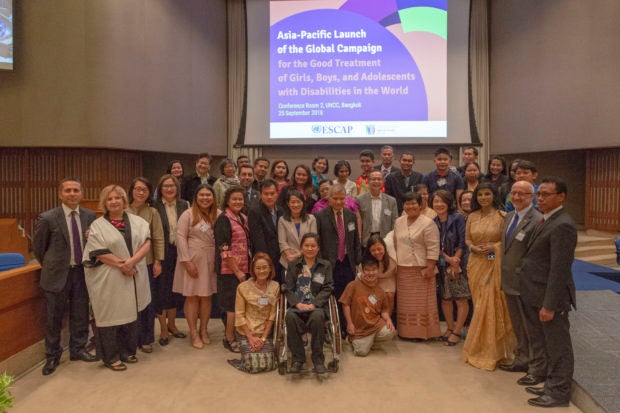 UN Secretary-General on Disability and Accessibility María Soledad Cisternas Reyes leads the launch of the UN’s first campaign to eliminate violence against children and adolescents with disabilities in Asia-Pacific. PHOTO by UNESCAP Strategic Communications and Advocacy Section

PWDs are often “left behind” due to misunderstood needs and the lack of support from governments.

The campaign introduced the 10 principles for the protection, well-being, and development of children and adolescents with disabilities who are at greater risk of experiencing violence.

In his opening remarks, Kaveh Zahedi, Deputy Executive Secretary of Economic and Social Commission for Asia and the Pacific (ESCAP), said an estimated 690 million persons living with one or more forms of disability are in the Asia-Pacific region.

“Children and adolescents with disabilities are more vulnerable to degrading treatment and more at risk of experiencing violence. Leaving no one behind means addressing their vulnerabilities. And we must act now,” he said.

Sanphasit Koompraphant, of the Center for the Protection of Children’s Rights Foundation in Thailand, said the real barriers in the life of children with disabilities are social, cultural, attitudinal, and physical obstacles created by society.

Persons with disabilities, including children, are four times more likely to experience physical and sexual violence than their peers without disabilities. They are also not seen as ‘rights holders’ due to misconceptions. They are deprived as well of liberty and legal capacity.

In Japan, there are an estimated 25,000 PWDs including a nine-year-old girl who underwent compulsory sterilization or Eugenics to prevent the ‘inheritance of disability.”

Disabilities also intersect with age, gender, and being stateless. Children and adolescents may also be classified as disabled due to limited movement or because of inaccessibility to services provided by ‘unwilling’ host states.

Children with disabilities are often not sent to school, and if they receive schooling, it is usually of “no quality.” As adults, they have the least chance of employment.

Dr. Seree Nonthasoot, Representative of Thailand to the ASEAN Intergovernmental Commission on Human Rights (AICHR), added that societies consider disability as a curse, stigma, or burden, and PWDs are often deemed incapable of independent decision-making.

Giselle Montero, director of the Center for Partnership and Development of Deaf Education and Applied Studies (SDEAS) at De La Salle-College of Saint Benilde, cited PhilHealth data estimating that one out of seven or around 5.1 million Filipino children is living with disabilities.

In a widely circulated vlog, Drew Olivar, a friend of Margaux Uson, an appointee of Philippine President Rodrigo Duterte to the Presidential Communications Operations Office (PCOO), was seen making inappropriate gestures offensive to the deaf community.

Equal access and opportunities, especially for quality education among PWDs, are guaranteed by the 1987 Constitution under Article 14. There were other laws enacted to support this, including RA 5250 enacted in 1968  which mandates 10-year training for special education teachers; RA No. 7277 Magna Carta for Persons with Disabilities; and its amendment, RA 9442, with prohibitions on Verbal, Non-Verbal Ridicule and Vilification against Persons with Disability.

Private sector groups like SDEAS have been addressing the needs of deaf youths and adults since 1991. One of the services the school provides students and alumni is finding companies willing to employ deaf graduates in the service (hotel and restaurant) sector, graphics, call centers (as support staff and as analysts), and in the government.

Despite laws protecting the PWDs, these are not very strong in the Asia-Pacific region, but starting a campaign and using media to advance their rights are starting points to realize the 2030 Agenda relating to education, growth and employment, inequality, accessibility of human settlements, as well as data collection and the monitoring of the SDGs.

Dr. Seree urged governments to support the institutional mainstreaming of disability rights to eliminate misunderstanding. This also includes the governments’ creation of enabling environment which is holistic.

He emphasized that PWDs are political and economic actors. Hence, the need for their active participation in decision-making.

Reyes, herself visually impaired, said, “This campaign is for the happiness of the girls, boys, and adolescents with disabilities. Give them an environment to develop all their abilities and merits, capacities, talents. Eliminate stereotypes, prejudices, and harmful practices. This is the beginning.”

The launch was supported by the Royal Thai Government, the Embassy of the Republic of Chile to the Kingdom of Thailand, the UN Special Representative of the Secretary-General on Violence Against Children, the UN Office of the High Commissioner for Human Rights (OHCHR), UNICEF, UN Economic Commission for Latin America and the Caribbean (ECLAC) and UN Women.

A similar campaign will be launched in the Dominican Republic and the Caribbean, South Africa, South America, and Chile. /ee