Protests vs PH killings, return of Marcoses echo in Geneva 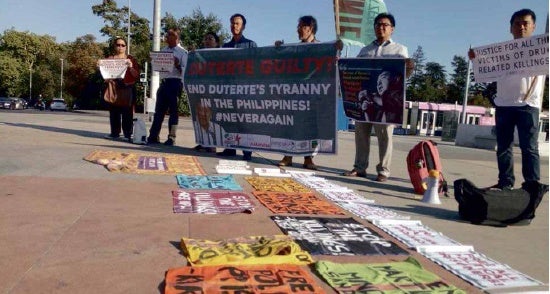 ‘NEVER AGAIN’ Filipino human rights advocates in Geneva, Switzerland, hold a demonstration on Sept. 21 to mark the 46th anniversary of the declaration ofmartial law under the Marcos dictatorship and denounce alleged rights violations and state-sponsored killings under the Duterte administration that are under investigation at the International Criminal Court. —CONTRIBUTED PHOTO

Filipino human rights activists on Friday rallied in Geneva, Switzerland, to commemorate the 46th anniversary of the martial law declaration by dictator Ferdinand Marcos, a day after the International People’s Tribunal found President Rodrigo Duterte guilty of gross violations of the civil, political, economic and sociocultural rights of the Filipino people.

The mass action was staged on the sidelines of the 39th session of the UN Human Rights Council, where Filipino activists called on the United Nations to conduct an independent investigation of reports of alleged human rights violations in the Philippines.

“We are being wrongly tagged as terrorists when the real terrorists responsible for mass murder and rights violations against the Filipino people are in government,” said Beverly Longid of the International Indigenous Peoples Movement for Self-Determination.

Longid is among about 600 people listed by the Philippine government in a court petition to proscribe the Communist Party of the Philippines and its armed wing, the New People’s Army, as terrorist organizations.

“It is important that international mechanisms act urgently on the plight of victims of extrajudicial killings in the Philippines,” said Rev. Ritchie Masegman of Rise Up for Life and for Rights, a network of drug war victims and advocates that recently filed a complaint against the President at the International Criminal Court.

The protesters also denounced the Duterte administration for helping the “political comeback” of the Marcos family and Speaker Gloria Macapagal-Arroyo.

“His regime has become a grotesque amalgamation of the tyrannical rule of the two murderous regimes,” said Cristina Palabay, secretary general of human rights group Karapatan.

Human rights defenders and political dissenters have also been illegally arrested and detained on “trumped up” charges, the protesters said.

“My father, peace consultant Rafael Baylosis, and my husband, trade union organizer Maoj Maga, are among this regime’s victims,” said Eleanor de Guzman, adding that there are about 500 political prisoners in the Philippines.

Environmental defenders have suffered the most number of killings and rights violations because they are seen as threats by businesses and the government, said Clemente Bautista of Kalikasan People’s Network for the Environment.

At least 61 environmental defenders have been killed during the Duterte administration, Kalikasan said.