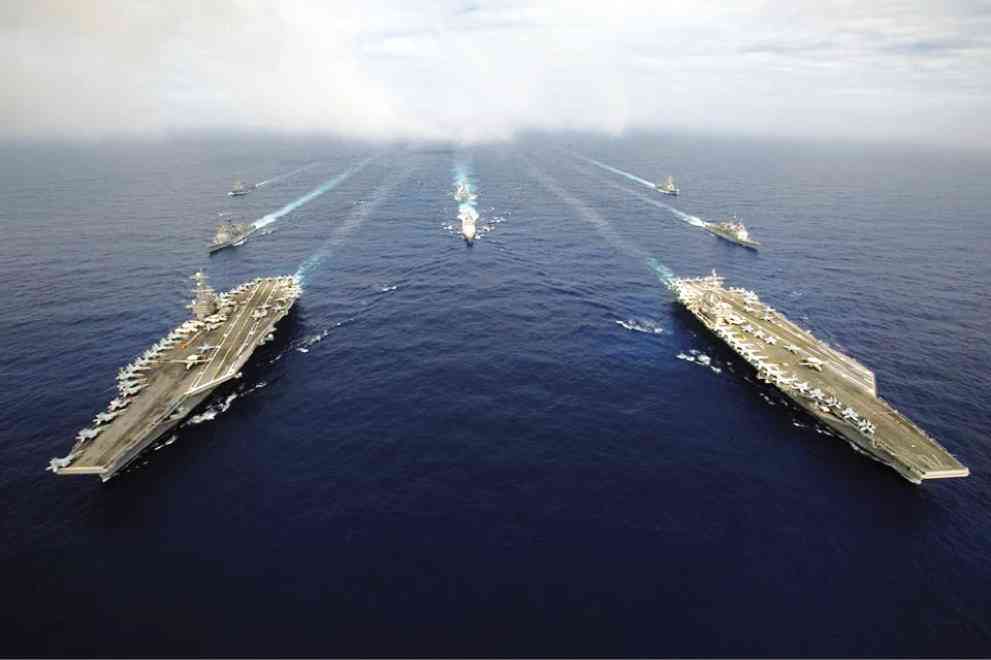 COORDINATED OPERATIONS The Nimitz-class aircraft carriers USS John C. Stennis and USS Ronald Reagan conduct dual carrier flight operations in support of security and stability in the Indo-Asia-Pacific region. The activities mark the US Navy’s continued presence throughout the area of responsibility. US NAVY FILE PHOTO

Navies of foreign powers outside the region sail to the South China Sea to cause trouble with their freedom of navigation operations, the Chinese envoy to the United Kingdom said.

Liu Xiaoming, ambassador of China to the UK, told the Induction Program for Commonwealth Diplomats on Wednesday that the regional states have made efforts to ease the tensions in the disputed waterway.

“Some big countries outside the region did not seem to appreciate the peace and tranquility in the South China Sea. They sent warships and aircraft all the way to the South China Sea to create trouble,” he said in his remarks which were later posted on the Chinese Ministry of Foreign Affairs website.

China claims most parts of the South China Sea, including waters close to the shores of the Philippines, Vietnam, Taiwan, Malaysia, and Brunei.

China and ASEAN countries are in the process of negotiating a Code of Conduct over the bitterly contested waterway.

Liu scored the freedom of navigation operations mostly carried out by Western powers like the UK and the United States, saying it was a “serious infringement of China’s sovereignty.”

“Freedom of navigation is not a license to do whatever one wishes. Such ‘freedom’ must be stopped. Otherwise, the South China Sea will never be tranquil,” Liu said.

Weeks ago, it was reported that UK warship HMS Albion sailed near the China-held Paracel Islands and China had warned it to leave.

Last week, a Japanese submarine, along with three ships, held exercises in the disputed waters. But Japan later denied that the activities were intended to challenge China’s massive claims in the hotly contested waters.

China, which has transformed disputed islands and reefs into military installations, insists that it has “indisputable sovereignty” over the South China Sea.