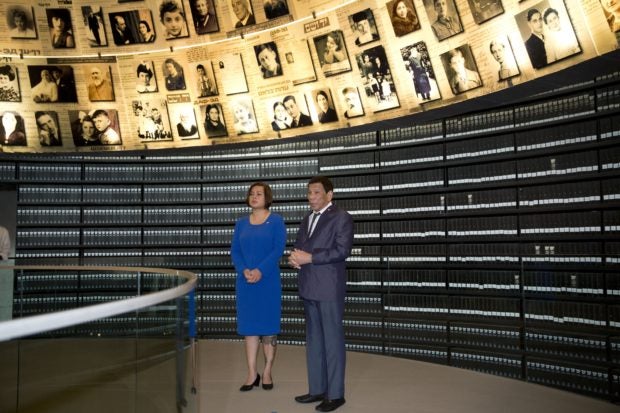 JERUSALEM—President Rodrigo Duterte, who once compared himself favorably to Adolf Hitler, paid a solemn visit to Israel’s national Holocaust memorial on Monday, branding the Nazi leader “insane” as he lamented the genocide of 6 million Jews.

The comments marked a dramatic turnaround for Mr. Duterte, who just two years ago had compared his brutal war on drugs to the Holocaust and said he would be “happy to slaughter” 3 million addicts. He later apologized.

Mr. Duterte, known for his profane outbursts and accused of committing widespread human rights abuses, spoke quietly and respectfully during his stop at the Yad Vashem memorial.

He stood alongside his daughter, Davao City Mayor Sara Duterte, whom he fathered with Elizabeth Abellana Zimmerman, his Jewish first wife, which by religious tradition makes Sara Jewish, too.

Mr. Duterte said the Holocaust should never be repeated and that “despots” have no place in the modern world.

“I could not imagine a country obeying an insane leader, and I could not ever fathom the spectacle of the human being going into a killing spree, murdering old men, women and children. I hope this will not happen again,” he said.

“There is always a lesson to learn: that despots and leaders who show insanity, they should be disposed of at the first instance,” he said.

On the guestbook he signed at the Children’s Memorial Hall, a tribute to 1.5 million Jewish children who were killed in the Holocaust, Mr. Duterte wrote: “Never again. May the world learn the lessons of this horrific and benighted period of human history.”

At the Hall of Names, Mr. Duterte reiterated that his daughter Sara is Jewish, her mother, Zimmerman, being a descendant of Jews who sought and were given refuge in the Philippines in the 1930s.

Mr. Duterte, the first Philippine leader to visit Israel, has received a warm welcome from the government, despite criticism that it is embracing a leader accused of rights abuses in his deadly crackdown on illegal drugs.

But during his meeting with President Reuven Rivlin on Tuesday, he received a lecture on Hitler from the Israeli leader.

“Hitler was actually representing the devil himself,” Rivlin said. “He was the devil on earth.”

Rivlin went on to say that Mr. Duterte’s visit to Israel’s Yad Vashem Holocaust memorial on Monday must have illustrated to him the sensitivity surrounding any reference to Adolf Hitler.

“Probably you have realized yesterday the feelings when you have visited the museum of Yad Vashem in Jerusalem, to really feel the atmosphere, to feel the feelings of all the people that were part of this disaster,” said Rivlin, whose position is mainly ceremonial.

Mr. Duterte appeared to be listening attentively during Rivlin’s brief comments. He later spoke about trade and cooperation with Israel.

A few dozen people opposed to arms sales to the Philippines protested outside the presidential compound in Jerusalem during the meeting.

Further arms deals were expected to be part of Mr. Duterte’s discussions in Israel.