Duterte: PH will only buy military weapons from Israel 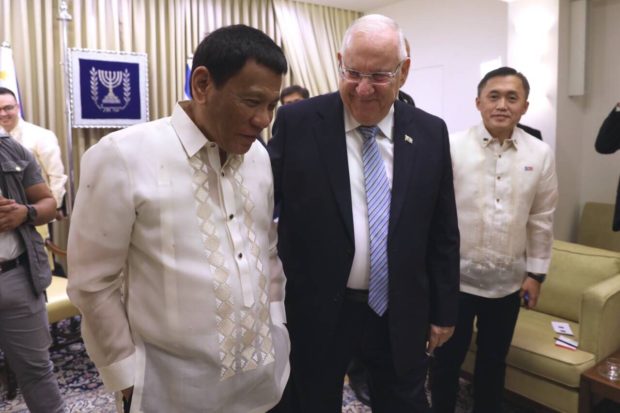 JERUSALEM – President Rodrigo Duterte on Tuesday told Israeli President Reuven Rivlin that he has ordered the Philippine military to buy weapons only from Israel.

“My orders to my military is that in terms of military equipment particularly intelligence gathering, we only have one country to buy it from. That is my order, specifically, Israel,” he told Rivlin in a meeting here.

The Philippines has long relied on the United States for military weapons and hardware.

“America is a good friend but you know, if he would sell you something, he would also be listening,” Duterte said.

“And so with China and everybody else, Germany. So you can be very sure that they are also amply connected with you,” he also said.

He said he saw no reason for Israel to spy the Philippines even if the country buys weapons from the Jewish State.

“And so Israel I do not see any reason that you would – there would be a problem in our relationship. We are too far away. We do not belong to the sphere of geopolitics here. But we side on what is morally right,” he noted.

The President thanked Israel for helping the Philippines fight Islamic terrorist during the five-month Marawi City siege in 2017.

“You have extended us critical assistance during the Marawi siege against the extremists. And the equipment that you lent us helped us a lot to win the war and shortened the period of fighting,” he said.

The Philippines, he added, has been a recipient of Israeli aid.

“In many times we have been recipient of your assistance. Most of these were the intelligence gadgets that used to defeat [terrorists],” he said.

Mr. Duterte then underscored the need for the Philippines and Israel to strengthen their counterterrorism cooperation.

“So the worldwide terrorism now, it behooves upon Israel and the Philippines to cooperate more than ever to defeat one enemy which I think could never disappear within the next 10 years,” he said.

The President cited the recent bombings in Mindanao.

“It’s going to be a long, long ride. They have started to bomb key municipalities in the island of Mindanao. It’s the island facing south. And we think that more than ever we would need to buy, to borrow the equipment,” he said.  /kga