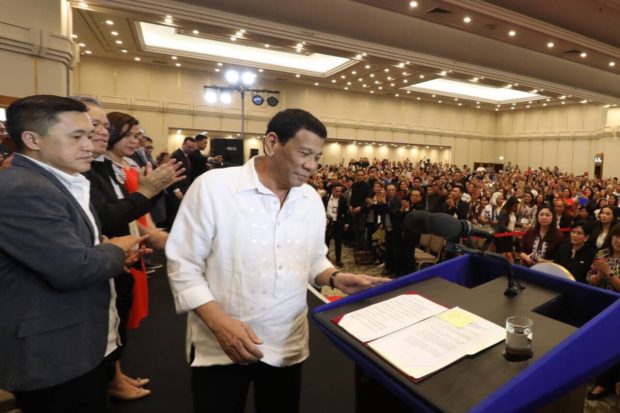 President Rodrigo Duterte meets with the Filipino community at the Ramada Hotel in Jerusalem as part of his four-day official visit to Israel. MALACAÑANG PHOTOS

JERUSALEM — President Rodrigo Duterte on Monday appealed to overseas Filipino workers (OFWs) to “choose the best” senators in the next year’s elections as he touted his Cabinet officials, some of them reportedly eyeing a Senate seat in 2019.

(There will be many Filipinos who will run, but please, have mercy on your country. You can see what other people have been doing.)

Duterte is the chairman of the Partido Demokratiko Pilipino-Lakas ng Bayan (PDP-Laban) but the ruling party has yet to release an official list of senatorial bets for 2019.

(Truthfully, you want a worker? A person who’s real. You can choose any congressman you want, but when it comes to senators especially — anyways, they’re far from you — just choose the best.)

During his speech, the President introduced one-by-one his Cabinet officials, including Special Assistant to the President Christopher “Bong” Go, Spokesperson Harry Roque, and Political Adviser Francis Tolentino, who are rumored to be eyeing Senate seats.

However, they have not made any public confirmation about their plans. /je