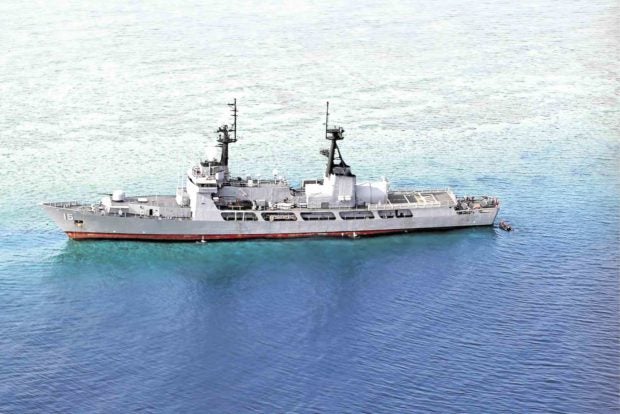 STRANDED Military officials say efforts to retrieve the Philippine Navy’s BRP Gregorio del Pilar, which ran aground on Hasa-Hasa (Half Moon) Shoal in the disputed West Philippine Sea on Wednesday night, may take at least a week. —PHOTO COURTESY OF PHILIPPINE AIR FORCE

Retrieval operations are underway for the Philippine Navy flagship BRP Gregorio del Pilar, which ran aground on a shoal in the West Philippine Sea on Wednesday night.

The operation may take until next week to be completed, according to the Armed Forces of the Philippines.

BRP Del Pilar and its crew got stranded in the vicinity of Hasa-Hasa Shoal while the vessel was conducting maritime patrols in the area. The barren shoal is known internationally as Half Moon Shoal and lies on the eastern edge of the hotly contested Spratly archipelago.

In a briefing on Friday, presidential spokesperson Harry Roque said the retrieval efforts were proceeding “without any problems from China.”

Roque made the remarks when asked what the government would do should China stop the Philippine Navy from retrieving the vessel in the disputed waters.

The frigate is one of three former US Coast Guard cutters which were acquired by the Philippine military from the United States and now are the country’s largest warships.

A military report seen by The Associated Press (AP) said the propellers of the frigate, which has more than 100 crew members, were damaged by the grounding.

The crew checked the frigate after it ran aground and found it was not taking in water.

Roque said this was the same vessel that former President Benigno Aquino III deployed to Panatag (Scarborough) Shoal to assert the country’s sovereignty there.

AFP spokesperson Col. Noel Detoyato told reporters that an “interagency effort” to extricate the frigate was in progress, with two tugboats from Batangas province—more than 800 kilometers away from where the ship is stranded—already deployed as of Friday.

Detoyato said the tugboats may take around two days, or this weekend, to reach the area: “They have the muscle; they have a strong pull, but they run slow,” he said.

Since the timeline of the retrieval would depend on the arrival of the tugboats in the area, the operation is expected to be completed by next week at the earliest.

In the meantime, Detoyato said, “floating assets in the vicinity” are available to secure the grounded warship, such as the  Philippine Coast Guard patrol vessel BRP Sindangan, which arrived at the shoal around noon on Friday.

No one was reported hurt in the incident.

Detoyato said initial information indicated that the sides of the boat ran aground, not the main propeller or the rudder. There was “very minimal damage” to the hull but no lasting damage such as dents or holes, he said.

The engine remains functional and “all other systems are working,” the official added. “An investigation is expected in such situations to find out the possible causes of the grounding and to come up with steps to ensure that similar incidents will be prevented.” —WITH A REPORT FROM AP