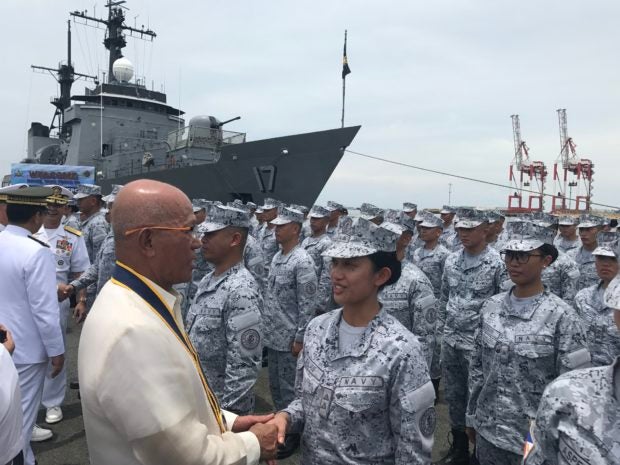 The Philippine Navy welcomes home its sailors and marines who participated in the Rim of the Pacific, the world’s largest maritime exercise on Monday (Aug. 27) in South Harbor. / FRANCES MANGOSING

After the Philippine Navy’s recently concluded participation at the Rim of the Pacific (Rimpac), the world’s largest maritime exercise led by the United States, Defense Secretary Delfin Lorenzana hopes that the country will join the next one and possibly send more ships.

“We hope that we will be invited again in the future so that we can send more people,” he said in his speech on Monday during the welcome ceremony for the Rimpac contingent on South Harbor.

A 560-man contingent from BRP Davao del Sur (LD-602) and BRP Andres Bonifacio (FF-17) joined the exercises held in Hawaii from June 27 to August 2. The international maritime exercise is held every two years.

It was the first time that the Philippine Navy sent its own ships for the maritime drills, sending a strong signal that the service is now ready to acquire new and modern capabilities like corvettes, frigates and even submarines, said Navy chief Vice Adm. Robert Empedrad.

“This is truly an important milestone not only for our Navy but also for our entire defense department,” Lorenzana said.

“This is a very good exposure for our defense people, not only the Navy and Marines, but we could also send some more power, like Army Special Forces, or Spow (Special Operations Wing),” Lorenzana said.

The defense chief also took the opportunity to highlight the importance of the exercises and interoperability among allies amid the rising maritime security challenges in the region.

“As we face growing maritime security challenges around the world, there is a need for navies to work together to increase familiarity and exchange best practices,” he said.

With these types of exercises, sailors and marines are exposed to new ideas to improve its own systems and doctrines, he said.

“It is also a good chance for our personnel to experience planning and execution of combined naval operations as well as establish the Navy’s capacity for prolonged operations overseas,” he said.

Notably missing from the Rimpac was China, which was disinvited by the US over its militarization of the South China Sea. /je