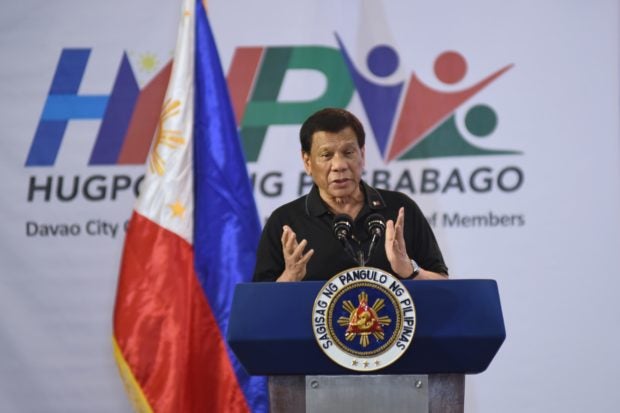 In light of a possible procurement of Russian submarines, the United States is now offering the Philippines its Lockheed Martin F-16 multi-role fighters and attack helicopters.

President Rodrigo Duterte on Thursday disclosed this as he read a letter signed by three Cabinet secretaries of the United States government seeking a meeting with him to discuss the Philippine military’s modernization program.

The letter was read during the 12th-anniversary rites of the Eastern Mindanao Command (Eastmincom) in Davao City.

“We know, however, that our nations can do even more to integrate our economic and security concerns,” read the letter sent by US Ambassador Sung Kim, as quoted by Duterte.

“Especially, we hope to partner in all the significant defense procurement of our mutual benefit, including the Lockheed Martin F-16 multi-role fighter platform, and your attack helicopter platform, among other US systems,” it stated.

Multi-role combat aircraft such as the F-16 fighter can perform various roles in combat such as air-to-air combat, air-to-surface attacks and aerial reconnaissance, among others.

The offer was reportedly made by the US government as the Philippines was eyeing a purchase of Russian submarines.

The US warned the Philippines not to proceed with the purchase, saying that it would hurt the two countries’ decades-long alliance and interoperability on the ground.

In response, Duterte slammed the US, saying: “Is that the way you treat an ally and you want us to stay with you for all time? Who are you to warn us?” /ee