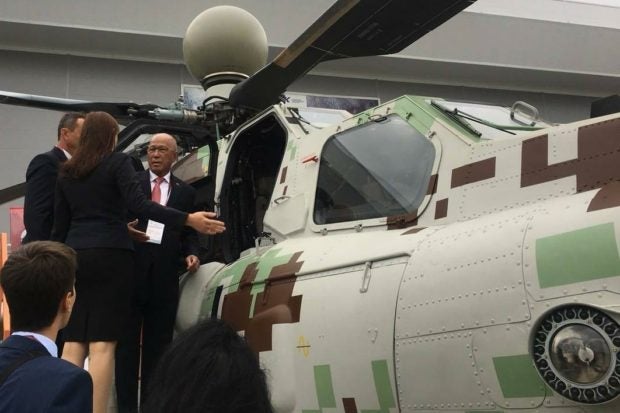 As the country scouts new military hardware from several countries, Russia is one of the suppliers willing to provide new military equipment to the Philippines.

“Russia is willing to provide brand new equipment, customized to the specific needs of the Philippines, at favorable financial terms, with reasonable delivery times, full after sales service, necessary training and without political conditionalities or limitations,” Philippine Ambassador to Russia Carlos Sorreta said in a Facebook post on Wednesday.

Lorenzana is in Russia for a series of meetings with defense officials and companies involved in procurement. He will also attend the International Military Forum, an exhibition of military equipment.

Sorreta posted photos showing Lorenzana checking out Russian military equipment at the expo, saying the Cabinet official had the “pressing defense needs of the Philippines in mind.”

Lorenzana made the visit despite U.S. warnings to the Philippines against purchasing Russian submarines, saying it will hurt their decades-long alliance and interoperability on the ground.

Russia is being eyed by the Philippines as one of the potential suppliers of submarines, along with Germany and South Korea.

Sorreta said new military equipment would allow the Armed Forces of the Philippines to maximize its use than with used equipment.

“By procuring new and customized equipment, our armed forces will be able to maximize their use since they can be made to fit into our battle plans and tactics. Unlike with used and practically bare equipment, it is our tactics that have to be adjusted and compromised,” he said.  /muf